As we’re sure you are aware from our previous blogs we are obsessed with Petra, like completely, wholly, downright obsessed. It is the most stunning place and could not be more worthy of its Wonder of the World title because it sums it up completely, a wonder.

We decided to stay in Petra for three and a half days, it had been on our bucket list for years and now we were going, we weren’t rushing it in the slightest. We stayed in the Petra Marriott Hotel which was the best hotel we stayed in in Jordan on the whole trip. It hosts views of the whole of the Petra Valley and we are not lying to you when we say the sunset is stunning. 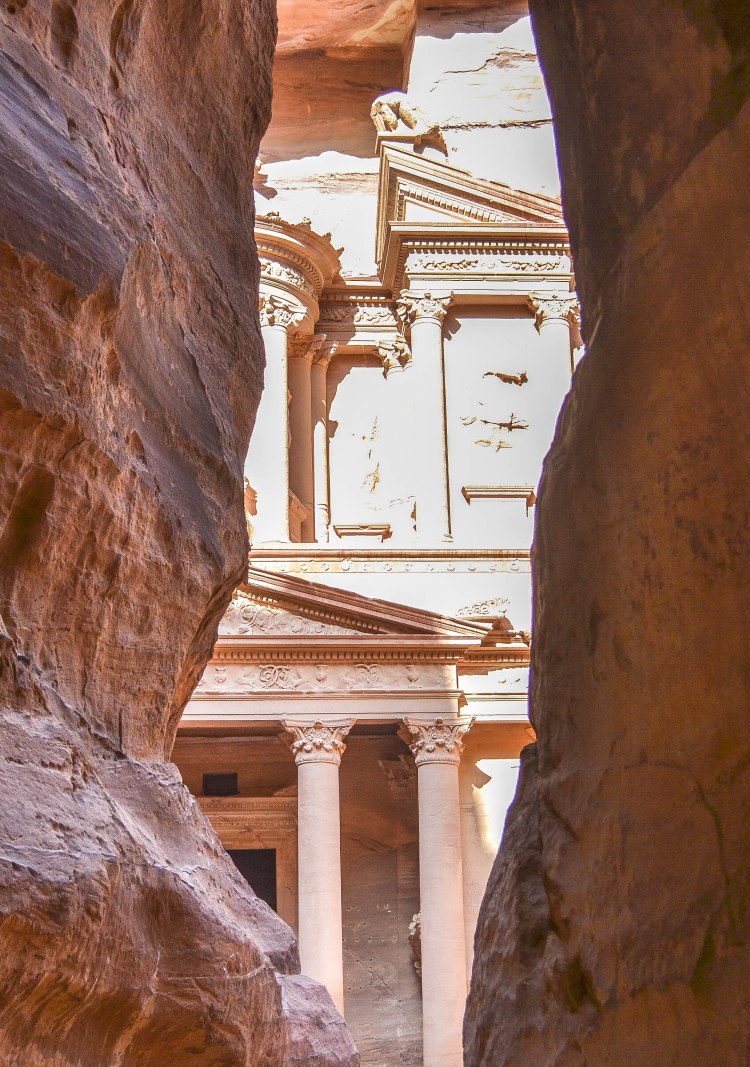 Now, are you ready for an early mornings? Petra opens at 6:00 am, be there for 6:00 am. You will nearly have the site to yourself and it is truly magical walking through The Siq with the early morning sun warming up the sandstone desert cliffs. The walk through The Siq is around 20/30 minutes depending on your eagerness but try and slow down, its an experience in itself. We cannot explain the giddy excitement which we felt as we came to the end and knew that the Treasury was just around the corner. We had been stalking this beast on good old Instagram for years and it was insane thinking we were going to see it in a matter of moments.

The Treasury did not disappoint. It was immense, bold, and unapologetic-ally incredible. And the thing that was even better was it was only the beginning! 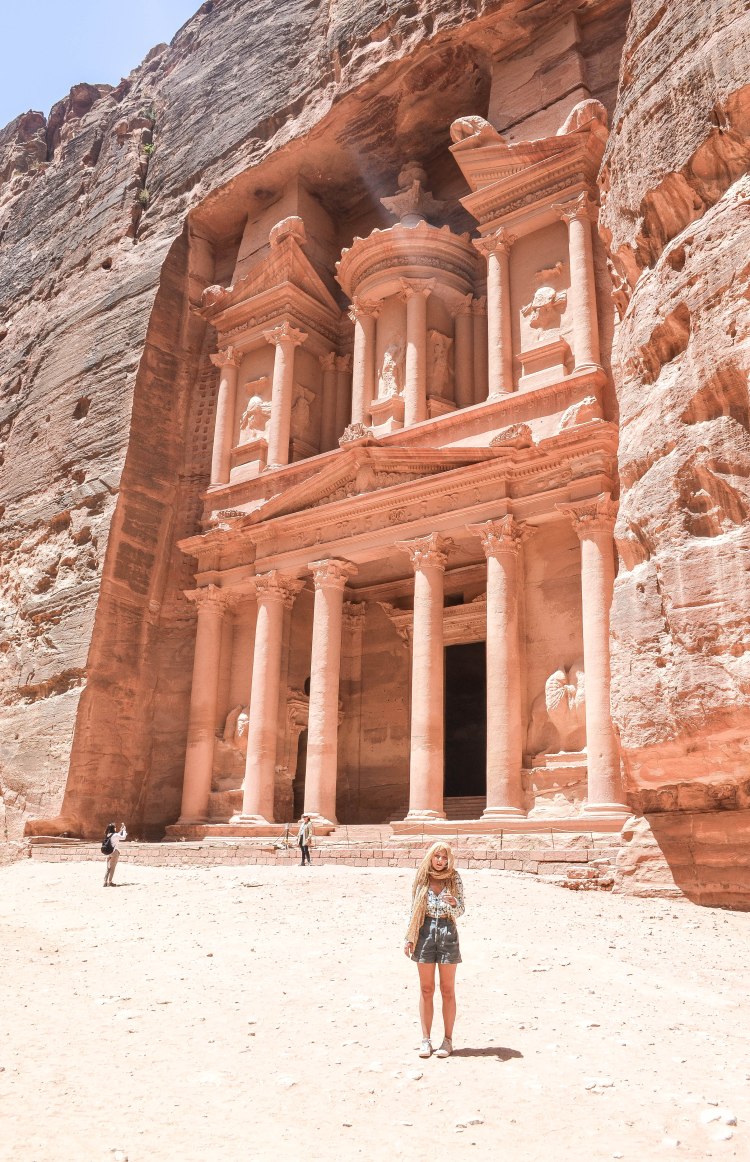 We had tunnel vision when researching Petra, we’re seeing the Treasury, whoop whoop and that was pretty much it. We were blown away by how much more there is to do! There are seven different treks to different sites and view points all over the ancient city and every view is breathtaking.

We started at the Treasury and then opted for the Green Trek which took us to the birds-eye-viewpoint of the Treasury as we knew that it would get much busier there later in the day. This takes you up sweeping wide steps on the side of the cliff and was the most picture worthy trek we took.

We then chose the Orange Trek to see the High Place of Sacrifice which is up through a gorge and then to the highest point in Petra which has 360 degree views of the whole site. Not one to miss! While up there we met a local Jordanian who showed us the channels dug for the blood sacrifice and pointed out all the points of interest around the ancient city. 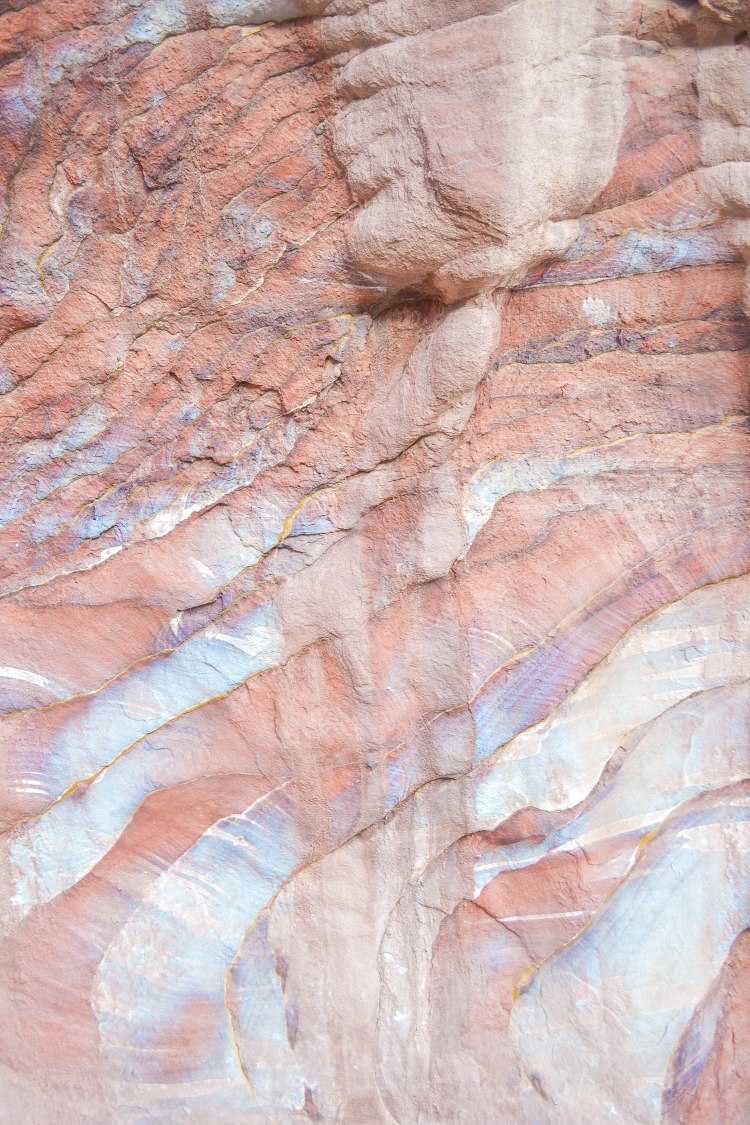 Our final trek for day one was the Pink Trek to the Monastery, word of warning, don’t do this at midday in 37 degree heat, its a 35- 45 minute solid climb and a really, really, really bad idea… But, make sure you do fit it in at some point, like the Treasury, it is a bold beast built into the sandstone.

Now, you cannot do Petra in one day, not even if you’re a cross-fit superhero. Also, don’t rush, take it in and explore! On our second day we went off-pest. While in Petra we did not see one single barrier, you can spot a cave and plan your route, unrestricted. We spent our second day in Dora the Explorer mode running here, there and everywhere poking our heads in caves and climbing up cliff sides. Its one of the best ways to see Petra for the vast, intricate city it was. 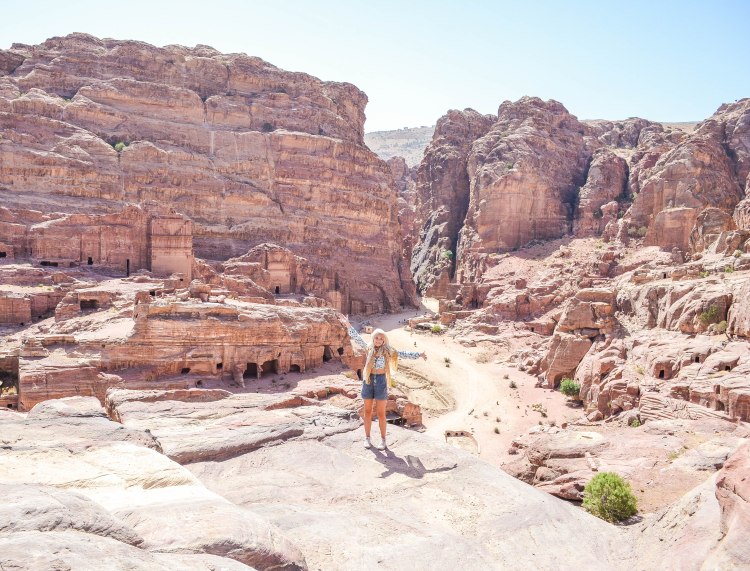 Top Tip: Get a two day pass for the site, it is peanuts more and you can spread your explorations out.

Finally, a trip to Petra wouldn’t be complete without a trip to Little Petra, the settlement before Petra. Now, after seeing Petra it’s not going to be as awe inspiring as it would be on any other holiday but still worth a visit. While we were there the blossom was in full bloom and the site was magical. It is much smaller but free admission and the drive there is stunning by itself. 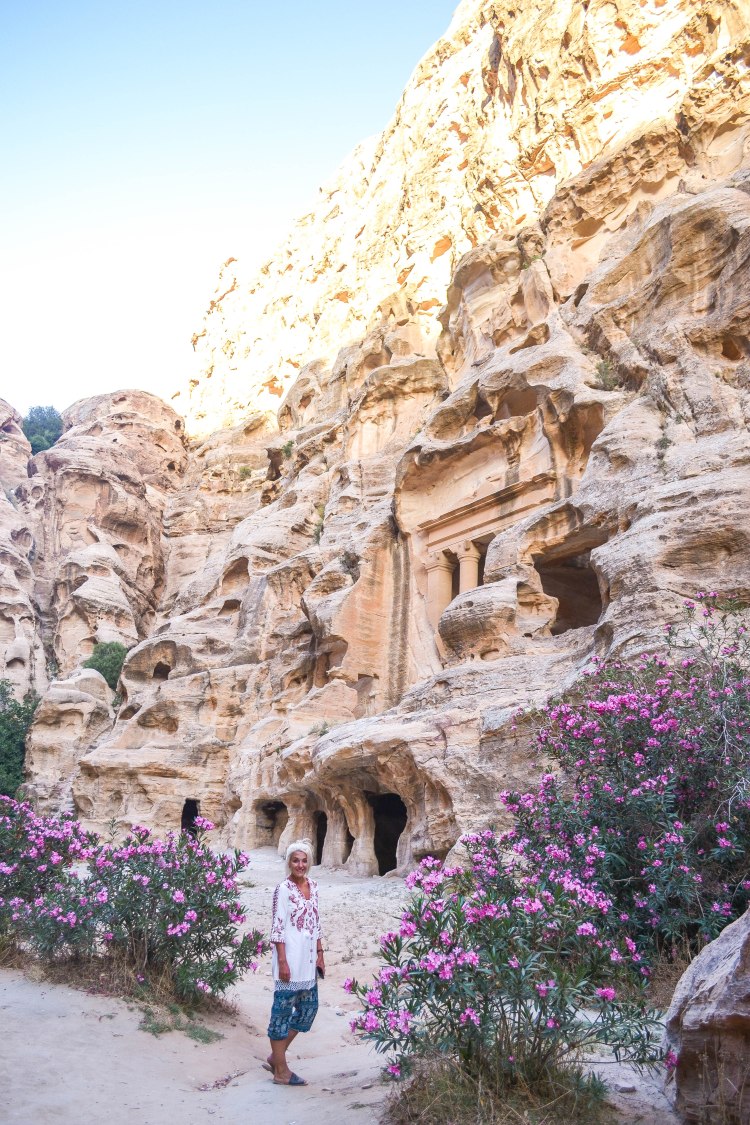 One thought on “The Jordan Series: All The Reasons To Visit Petra”