Camilla and I love a cheeky little Cotswolds weekender, or even just a day escape from London. We’ve spent may hours driving around and seeing all the beauty that this little nook in England has to offer so, we thought we would share our favourite little spots. This is not an extensive list however, the Cotswolds is built for the slower pace of life. The best thing is walking around little villages, nipping in and out of quaint bric-a-brac shops and stopping off for pastries, tea and ice cream every five minutes. This is not a place to speed walk around, this is a place to wander.

These two little villages, which are right next to each other, are a dream and come a close second for the prettiest Cotswold’s village right after Snowhill (which you’ll find out more about later, if you don’t get bored before that!) They’re situated on a little stream and are just ridiculously charming.

We walked along the stream between the two villages on both sides. We also turned up by the watermill which takes you up to a great little bric-a-brac and leather shop attached to a little cafe on the river, which sells the best scones. A perfect little pitstop to pause and add some extra calories onto your diet.

Apart from wandering around, the little shop and cafe there isn’t much more to do but the whole time you spend in the Slaughters is dreamy and it’s definitely somewhere you can’t not put on the list.

It was the prettiest sight. Powerful purple lavender plants everywhere and people wandering in between them or sitting on the side lines on benches or picnic blankets relaxing. We loved it. Unfortunately, as we had only found out about it ten minutes beforehand we didn’t have a picnic with us so we just spent around an hour wandering around the lavender plants.

There are loos and a cafe where you can by drinks and ice cream from, even lavender ice cream!, and as we’ve said before, it would be a perfect place to spend a sunny day.

One word of caution: Bumblebees. There are bumblebees everywhere and I mean literally EVERYWHERE. And sometimes they think it’s a good idea to fly up you dress… and then get stuck… and then panic… and then decide to commit suicide by stinging you in the leg which is pretty f***ing painful. So yea, there are bumblebees there… beware.

When visiting the Cotswolds a trip wouldn’t be complete without going to Bourton-on-the-Water. It’s a great little town situated on a shallow stream where in the summer children paddle, have water fights and dogs splash around. We have spent many lunchtimes here just watching the world go past, dipping our toes in the water and eating all the Cornish ice cream! There are lots of little shops to keep you entertained, a rustic motor museum (which we have to admit we have never been inside) and a model village. 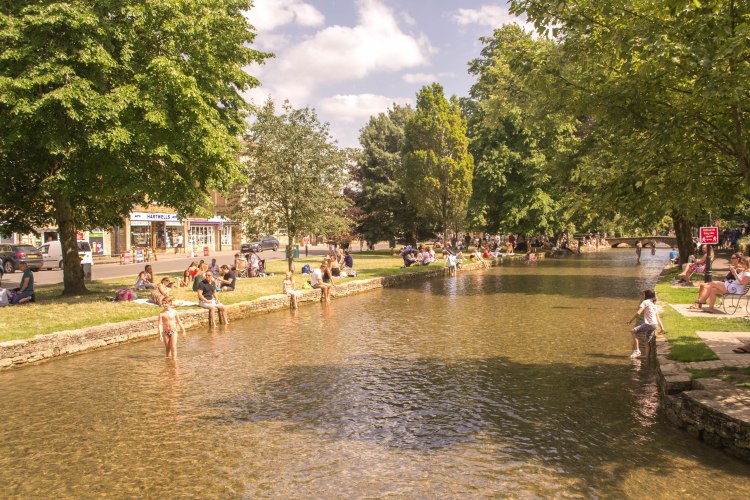 The only downside to Bourton-on-the-Water is that it is never calm, never quite and never empty. It’s probably the number one spot on the tourist Cotswolds hit list, especially for people travelling from abroad. If you hit Bourton-on-the-Water at the wrong time when a tourist coach has just landed, you’re not going to see this little village at its best so we would recommend seeing it in the morning or setting up your picnic early on to make sure you get a nice spot right next to the water if you’re doing an all-day-er.

Don’t let the crowds put you off, just forward plan so you enjoy it as much as possible. 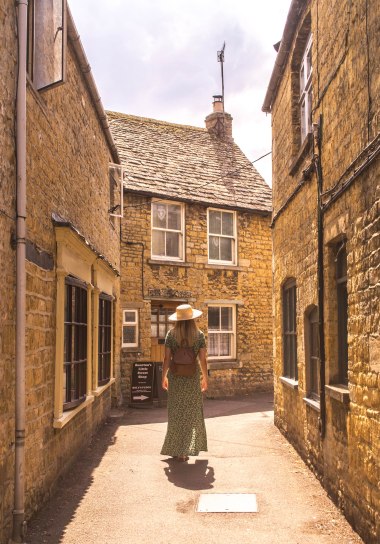 Now, this little village is teeny- tiny, what you can see in the pictures below is pretty much the whole thing. However, it’s so charming and beautiful it’s one of our favourites. There’s literally nothing to do here apart from enjoy the view. While we were there having a wander around (maybe for only 20 minutes or so) we didn’t see another soul. It’s not on the tourist hit list but it definitely worth stop off. We would have loved to have brought a little picnic and sat in the church gardens for longer but we didn’t forward plan enough for that.

Another time for sure!

Another reason why we love this beautiful little village is that it’s close to a selection of poppy fields. The one we went to was on the B4077 just north of Upper Swell, parallel with Condicote.  We heard about it from our friends Postcards By Hannah and What Stacy Did who are absolute Cotswold Queens and you just need to drive around and search, it’s not an official attraction. Which kind of makes it more fun!

The owners of the poppy field welcome you to enter and have a look around, they just leave an old milk bottle at the entrance and ask for a small donation. The field itself is beautiful and while we were there there was only one other family. There are small paths through the poppies so you can avoid stepping on them and we kept Chester on the lead so he didn’t trample any either! We absolutely loved it and would highly recommend it to anyone travelling to the Cotswolds in June! 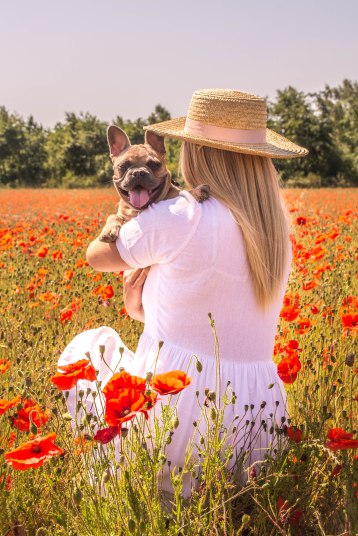 Burford is also know as the ‘gateway’ to the Cotswolds because it probably the first town you’ll hit when you enter the Cotswolds. It’s an old medieval market town and has lots and lots of quaint little shops to wonder round and on of the biggest concentrations of antique shops. All the buildings are skew-whiff and you have to hold on tight as you climb their winding, rickety staircases while you’re shopping around but the whole town is magical.

You could easily spend a whole afternoon browsing the shops and the town even has a good selection of pubs and bakeries for a bite to eat.

We used Zipcar for our road trip to the Cotswolds. Read Five of the Best Day Trips From London with Zipcar to find out more!

2 thoughts on “Five Places To Visit in The Cotswolds”