If you’ve been following our travels for a while you will have seen Norway is quickly becoming one of our favourite destinations. Less than six months ago we had never been to Norway but fast forward to now, we’ve been twice with another trip booked in the summer. The landscape is truly to die for. The sweeping mountains, the deep fjords and never ending views are what dreams are made of.

However, this time round we discovered there is a way to see these views in style in the winter… cue Beito Husky Tours.

Husky sledging has been on our list for quite some time! It’s literally something we’ve dreamed about doing and when we found Beito Husky Tours we knew we had found the company we wanted to do it with! We absolutely love dogs and spending time playing with them in the snow, going on adventures together and cuddling afterwards drew us to the Beitostølen mountains like a howl to the moon… [pause for effect]

Now obviously, if you have more time this could just be one activity in the never ending list of things to do while you’re road tripping the whole of Norway. But, if you’re like us and life is hectic, you want to squeeze in as many weekend adventures as possible. Well, this can be done in a weekend!

We flew into Oslo on the Friday evening and stayed at Smarthotel Oslo bam smack in the city centre. We knew we were literally going to be sleeping there for a few hours and leaving again so it was a no frills hotel, clean and included everything we needed. It was also only £58 for the evening and considering Norway can be on the spenny side thats not bad at all!

After a very adequate nights sleep we were off early to the bus station. Beitostølen is around a four-hour drive from the centre of Oslo so you’re booked onto an 8:35 bus by Beito Husky Tours. This allows maximum amount of time with the dogs – we’re not complaining.

Now, four hours might seem like a long old time to be sat on a bus doing nothing but when you have the views of Norway for entertainment its flies, trust us! We were mesmerised by the views and didn’t actually want the bus trip to end… joking… kind of!?

Once you’re in Beitostølen the bus will take you all the way down to the area where Beito Husky Tours is based, so there’s no chance of getting lost and as soon as you’re off the coach it’s go, go, go! You will meet you tour guide and be taken straight into the changing hut where they’ll provide you with warm overalls, boots and pretty much anything you need to keep warm while you’re out in the snow! The dogs are pretty friendly and they will jump up at you constantly so we’d recommend putting the overalls over your pretty, little ski gear… no one wants a ripped puffer jacket!

As soon as your dressed its a fun five-minute walk through the snow towards the dogs and trust us, you’ll hear them before you see them! Beito Husky Tours have a pack of 50+ dogs and they are a sight to behold. As soon as you walk round the corner to where the dogs stay you’re free to play, cuddle and stroke as many as you like and they’re all up for it! Not once while we were there did we feel threatened by any of the dogs. If you not a big fan of being jumped on by pretty powerful pooches then choose the ones you approach carefully, but after growing up with labradors we’re pretty used to it!

One of the reasons we chose to travel with Beito Husky Tours if the level of involvement you get with the dogs. You’re not just given a prepared sledge, a guide and driven around for a few hours, you’re there to work. Once you’ve gotten rid of the giddiness you’re straight into training. You’re taught how to get the dogs ready, how to drive the sledge by yourself, how to get yourself back up if you fall over (we needed this advice) and how to keep the dogs still when you’re stationery. You’re given the opportunity to really work and bond with the dogs and that’s the hands on experience we were looking for!

Once the briefing was complete we were off to collect our team members. On our sledge we had Bruno, Eric, Golstad, Tilly and Timone who were all absolute babes. However, connecting them to the sledge was interesting! They’re all so crazy excited to go running they’re jumping around all over the place but once they were connected we were ready to go.

You’re out sledging with the dogs for just under two-hours and it’s genuinely magical. You’re lead by the tour guide so you don’t need to worry about navigating your way around and the dogs are so incredibly well behaved and responsive to commands it’s brilliant.

We were a little worried about driving the sledges ourselves and it was all a panic over nothing, it’s super easy once you get the hang of it and if we’re being really honest with you, we tipped the sledge… well, I, Natalie tipped the sledge. The only people/person on the whole tour to do it but to be fair, we fell into soft, white power (Camilla did get a mouth full of snow actually) but then we got back up, put the sledge right and off we went again!

Once you get back to base its time for a little bit more puppy play time! You have time to unclip your dogs, take them back to their huts and have a little play around. We were actually the last people standing and had to drag ourselves away from the dogs when it was time for dinner.

After a full day in the snow you don’t realise how chilly you are until you step inside the cosiest yurt for dinner. Unbeknown to you, there has been a traditional deer stew stewing all day and it is just delicious. It is served with flat bread and a berry jam for sweetness. I was even on veganuary and I couldn’t say no!

After a while relaxing and warming up, if you’re only there for the day it’s time to say goodbye to the dogs and head back to Oslo. But not for us. A few weeks before the trip we were researching Oslo and there wasn’t anything which was really exciting us about the city, nothing which we would want to spend a whole day doing on the Sunday. So, we made the decision to stay with the dogs for the evening and get the bus back to Oslo on the afternoon on Sunday in time for our flight home. One of the best decisions we’ve ever made we think!

Beito Husky Tours have two little huts which you’re able to stay in for the evening. They don’t have any electricity and you have to walk a little to get to the loo. However, after a rustic day with the dogs what more do you need than a log burning fire in a wooden cabin with only the stars for company? It was incredible and one of our favourite parts of the trip… after the dogs obviously!

Top Tip: Bring a head-torch to help you get to the loo, it can be pretty dark when the sun goes down. Also, pick up some snacks and some wine if you fancy it to keep you company for the evening! There is also a sauna which you can try, we didn’t opt for this but there’s always next time… 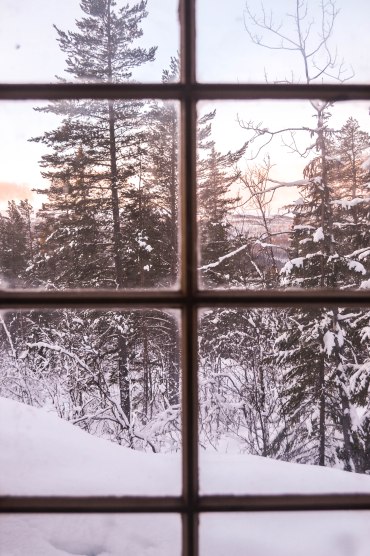 After a toasty evening in the hut we woke up and headed back out to the frozen lake where we were sledging the day before for a walk. We were totally alone in the middle of a winter wonderland and it was the best. We spent the morning wandering around, taking the views in before heading back to see the pups one last time before we had to leave. It was genuinely quite upsetting having to leave the dogs, we could have played in the snow with them forever but our flight back to London called.

Without a doubt this was one of the best ways we have ever spent a weekend and we can’t recommend it enough! We will be back for sure to do a longer expedition now that we’re pro husky sledgers. 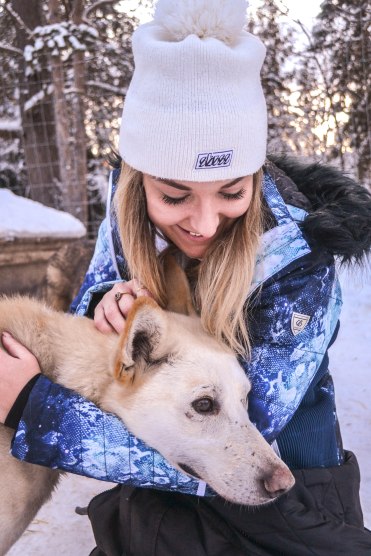 Why we chose Beito Husky Tours: It was really important when we set out on this project to find a company which looked after the dogs in the ‘right way.’ Animal tourism has its negatives and we didn’t want to work with a company which mistreated the animals. Beito Husky Tours is a relatively small company who treat every single dog like family. Each keeper knows each and every dog by name and loves each and every one. They have huts to sleep in at night, the are all exercised regularly, they are fed well and as we’ve said they are loved.

While we were there we were discussing the dogs and asked what happened to the dog when they were too old to run. We were horrified to hear that some other husky sledging companies euthanise dogs at this point. However, all Beito Husky Tours’s dogs are re-homed and spend their later years snuggled up in front of someones fire.

We can’t recommend Beito Husky Tours enough, but if you do decided to book this once in a life time trip with another company, please dig a little deeper and do some research first.

**Gifted: Thank you to Dare2b for gifting us with the cosy and bright clothes we are wearing in the pictures** 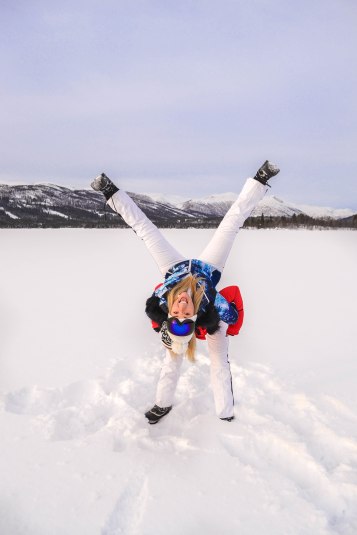