Last week I (Natalie) trotted back across the sea to a destination I had been dying to see forever. The little cobbled, winding streets had totally charmed me in images and it had been on the bucket list for a long time. I have to say I was not left disappointed. From the absolutely amazing food to the insane sunsets… Every. Single. Night! I really couldn’t have asked for more.

Before you go to Dubrovnik, be aware that it is pretty expensive – we’re talking London prices here, so you might want to do a little bit of saving. Also, there aren’t many hotels if you want to stay in the Old Town of Dubrovnik which I did – I like to pretend I’m in a Disney movie – so check out apartments or Airbnb for accommodation – you don’t get breakfast made for you every morning, but it’s totally worth it to stay in the Old Town!

Although our stay was short and sweet, we still managed to squeeze everything we wanted to do in Dubrovnik in. To save you some time when planning your trip, here are eight things to do in and around Dubrovnik…

Hands down our favourite thing to do while in the city was walk to city walls. Lots of people had recommended this to us and we were always going to do it, but we did wander what was so special about walking around an old wall? Well, you get the most epic birds eye view of the city and it is literally stunning. The colour of the roofs and the zigzag lines of the streets you can see over is just mind blowing – and something we say is a must do. 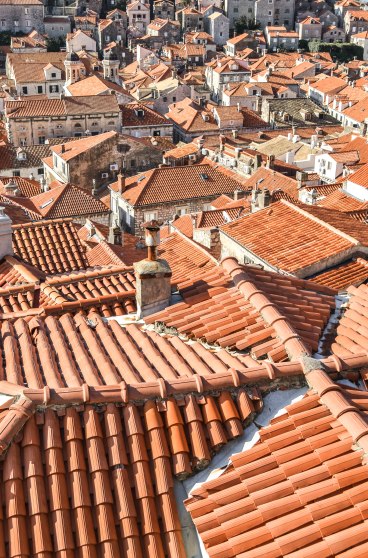 It took us just over an hour and a half to walk the City Walls with a few stops. We would recommend getting there early, the walls open at 8am most of the year and we were eager beavers arriving band on time. Dubrovnik is a very busy city, especially when the cruise ships come in so it’s important – if you want to experience things without a million other people – to get things done early or in the evenings. This also gives you chilled beach time during the best tanning hours – win, win!

It’s not cheap to walk the walls at 200 HRK per adult, but totally worth it as it is the best view you’ll see while in Dubrovnik.

Now, we’re big GOT fans, we’ve watched all 8 seasons, we’re not saying we like all 8 seasons – you know which one we’re talking about, and as you probably know much of  King’s Landing is based on Dubrovnik… and a few other places you wouldn’t have guessed.

There are many walking tours which you can take, we decided to go with Dubrovnik Walking Tour which cost 200 HRK, including entrance into some historical sights, and had the most awesome time. The tour guide will bring pictures of the show to jog your memory if needed and they are equipped with lots of great insider knowledge as they watched it being filmed first hand year after year. We don’t want to give to much away, so we’ll leave it there for you to discover yourself while you’re out there.

If you’ve never watched GOT before or have literally no idea what we are talking about right now… maybe best to give this one a miss. 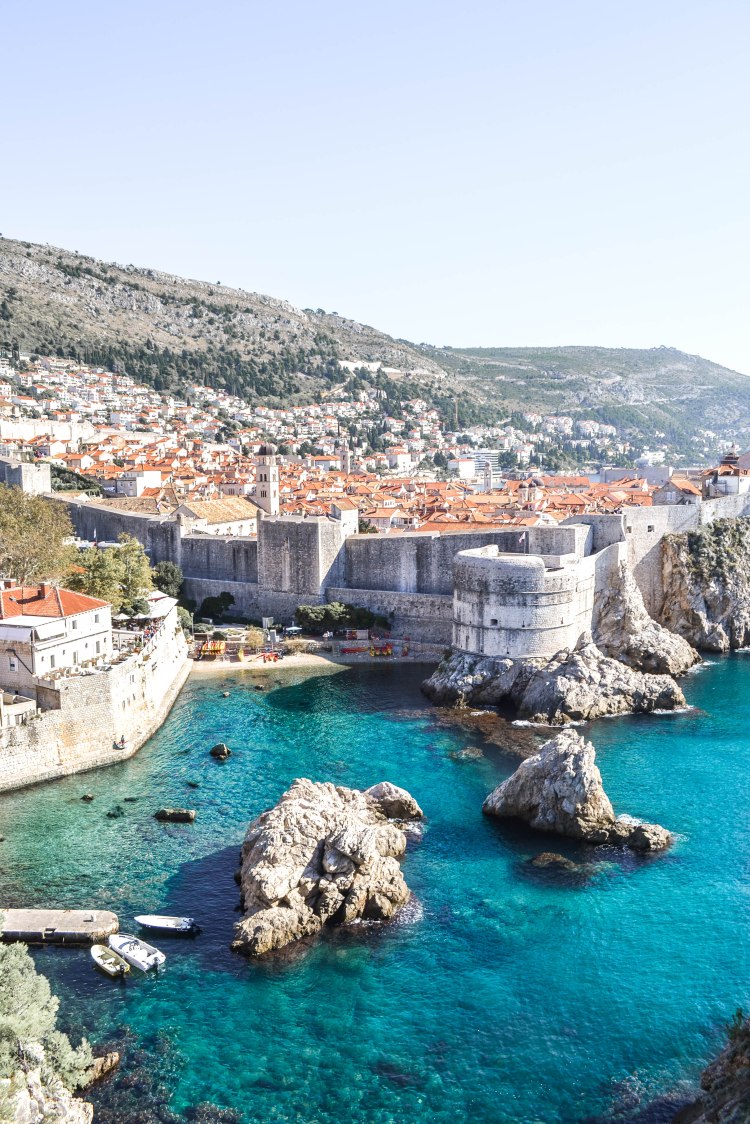 Sunset at Buza Bar was one of our favourite evenings! Dubrovnik has a really fab Mediterranean vibe and there is nothing better than watching the sunset on the cliff’s edge with a glass of wine, be it in a plastic cup. Buza Bar is located through a little hole in the wall at the bottom of town and is one of the worst kept secrets ever, so it’s best to get there early – oh and bring a load of cash as it doesn’t accept card. Again, its London prices…

We had been recommended this Buza Bar by a friend for sunset and we had accidentally stumbled across it in earlier in the day. Seeing its absolutely perfect location on the cliff edge with no distractions, we knew it was where we wanted to spend our first evening.

The colours which you get in Dubrovnik are out of this world and I think have only been rivalled by Zanzibar before. It was an absolute dream and we would have loved to have come back for another evening if we had has more time. 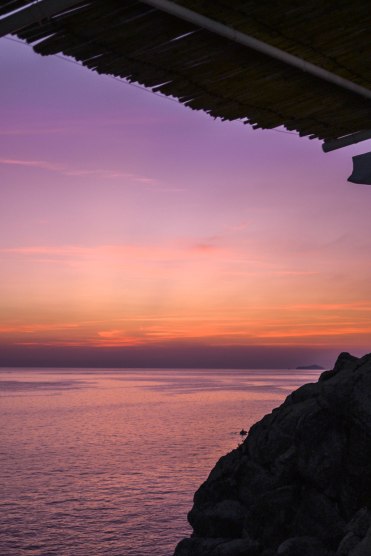 Wander through Old Town with no direction

There’s not too much to say about this… just get lost. The Old Town is a magical place with winding, cobbled streets, stairs which jut all over the place, bars squeezed into little nooks and churches surrounded by towering buildings nearly just as high. We left the city walls a few times and every time I walked back through the gates a wide smile spread across my face straight away. It has charm like no other place I have ever been before.

The Old Town of Dubrovnik also has soul. It isn’t a plastic, picture perfect town, local people still live there. You will find washing hanging everywhere, zig-zagging through the skyline, cats wandering around without a care in the world and people sitting on their front doorsteps talking for hours with their neighbours. The city is full of life 24/7. However, extremely chilled and non-showy at the same time.

Finally, it is super clean. We didn’t see one piece of rubbish the entire time we were there and that is a big thumbs up in our books.

We checked out a few beaches while we were in Dubrovnik and Sveti Jakov was our favourite hands down. It is around a half an hour walk from the old town or a ten-minute taxi, then a quick trip down a million stairs to the actual beach.

A lot of the beaches in the area are pebble and Sveti Jakov was no exception, but what makes this place really special is the chilled out vibes, the incredible view back over the Old Town of Dubrovnik and the amazing sunset to watch if you stay long enough. We spent a lazy afternoon chilling out here and it was the perfect contrast from the tight, full of life city.

At the beach there is also a beach bar which serves drinks, ice creams and food. It’s not a boom boom beach bar, but a rustic place where people also come to watch the sunset. They also have sun loungers which you can lay on so you don’t have to be on the bumpy stones… although some people chose to do this? Who are you people?!

On our final day we headed to Lokrum Island a nature reserve only a ten-minute boat ride away from Old Town. It costs 200 HRK per person for the boat ride and for the entrance into the park which we thought was a little steep, but we were curious.

Lokrum Island is home to a large collection of wildlife, but most famously for its huge population of peacocks. The are roaming around freely and there really is a lot of them. There are also hundreds of rabbits who are shy but friendly once they’ve warmed up to you.

Our favourite thing about Lokrum Island however was the crystal clear water. We had swam a few times around Dubrovnik so far and we had had no complaints about the water – we didn’t even know you could get better but it did, the water was amazing. You can walk around the island and find a little private spot, or you can head to the main area by the Dead Sea, a pool which has very salty water – to be honest, having been to the real thing before, it’s got nothing on the Dead Sea, but it’s a nice name.

If you love wildlife and crystal clear water to swim in this is your place. However, that is pretty much all there is to see/do… the other ‘attractions’ they advertise are pretty average.

Eat all the Ice Cream

Dubrovnik has some incredible ice cream stops, our favourite being one on the corer by Onofrio’s Fountain.

Just eat all the ice cream. That is all.

Actually do you know what… just eat everything! The food is not cheap, we’re not going to lie but… it is very, very, very good…! 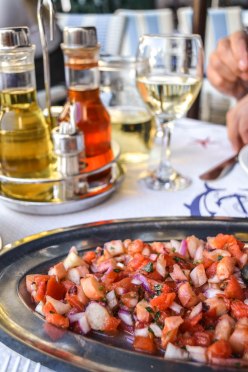 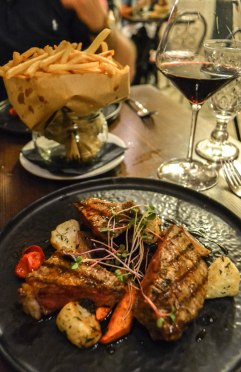 Watch Sunset from the top of Srd Hill

Last but not least was our trip up the Dubrovnik Cable Car for sunset. It was a beautiful view and not only can you see the Old Town of Dubrovnik but all the surrounding islands too. We were lucky when we arrived at the bottom of the cable car there wasn’t a huge queue, but a few minutes later it had really grown. To make sure you catch sunset I would recommend being at the bottom of the cable car at least an hour before the sun sets – there would be nothing worse than missing it.

The cable car cost 170 HRK for a round trip or 90 HRK if you’re someone who wants to hike up – whoever you are. To be fair, it is only a 40-minute hike, but that wasn’t what we were looking for that evening.

When you’re at the top you want to walk down to the memorial shaped as a cross and then continue through the bushes to the cliff edge. This is where the best views are and you be joined by loads of people, so don’t be scared you’ll be thrown off.

The queue to get down is pretty crazy too. Once the sun goes down everyone is obviously looking to leave pretty quickly but, if you hang around and grab a drink at the bar at the top you’ll have a cable car all to yourselves on the way back down. 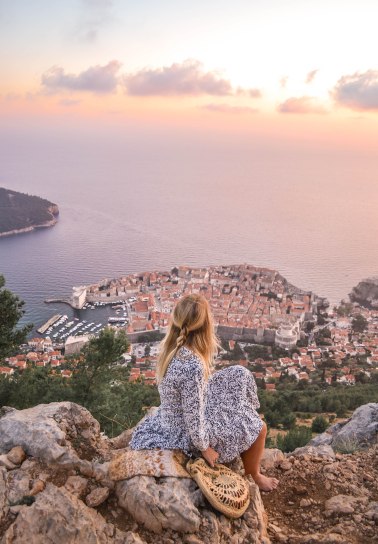 5 thoughts on “Eight things to do in and around Dubrovnik”