If you’re in Bali you have two options, you can head to Nusa Penida Island which is just off the coast of Bali or you can head to the Gili Islands – Gili Air, Gili Meno and Gili Trawangan – just off the coast of Lombok. If you have time you can go to both, but unfortunately we didn’t. Therefore, we chose to head to the Gili’s because there was a specific sculpture which we want to see… we’ll get to that later.

The three islands which make up the Gili Islands are all different and unique in their own way;

Gili Trawangan: the biggest of the islands with the most going on but also the busiest.

Gili Meno: the smallest of the three islands and where the special sculpture was.

Gili Air: which is in between but usually dubbed the ‘honeymoon’ island.

We chose Gili Trawangan because there was a bigger option for places to stay, there was little more to do and it was my birthday during our visit so we wanted something with a little bit of a vibe and finally because it’s where you get the best sunsets from!

Where we stayed: Utara Villas

We decided to stay at the beautiful, tranquil escape on the northern side of the island, a little further away from the ‘hustle and bustle’ because that’s not really the sort of trip we were looking for. From the calm little retreat you can get to sunset beach in 5-minutes by bike, you can get to a sand beach in 3-minutes by bike and you can actually just stay and lie by your private pool in your private villa and relax… naked.

Plus, the staff here were so warm and friendly. On my birthday they all came in and sang ‘Happy Birthday’ to me with sweets, they organised anything we asked and were always smiling as soon as you ‘arrived’ home. We genuinely wouldn’t stay anywhere else if we were to go back to Gili Trawangan. 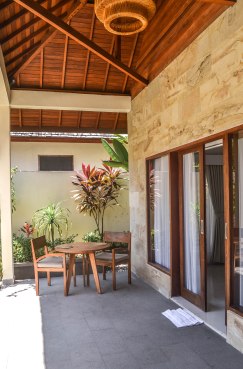 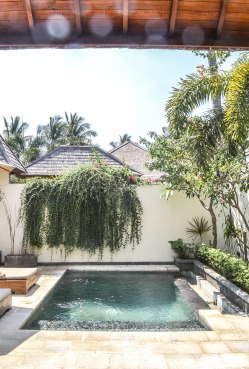 You can stay on Gili Trawangan for a long or as little as you like. We would suggest no less time than three days because it’s not a hop, skip and a jump getting there. It’s one of the most chilled islands we’ve visited so if you like the island life you can just pack up and move here. Again, we met people like us taking a three day mini-break from Bali and other who were there for a full two week holiday… 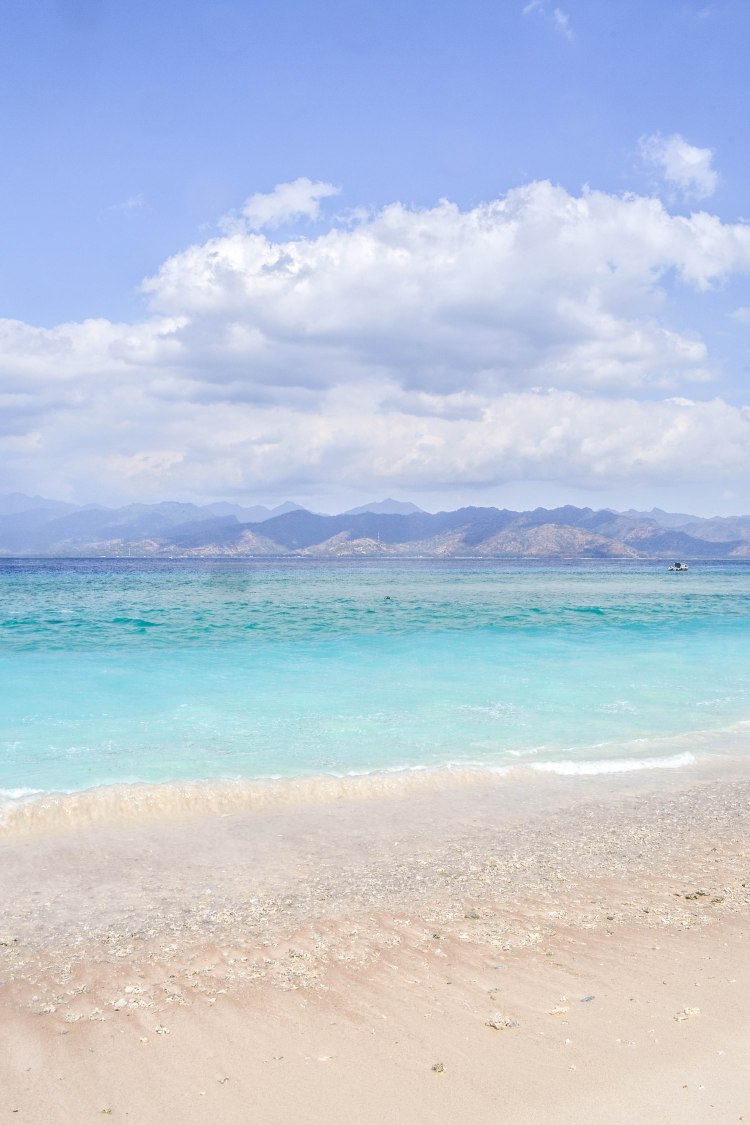 Sunset Beach for beers: As we mentioned we decided to go to Gili Trawangan for many different reasons, but one main one was the insane sunsets you get. One of our favourite things to do when we were there (which we did every single night without fail) is head down to the ‘sunset beach’, the beach on the south-west side of the island, grab a beer and watch the sun go down.

Now, they will try and offer you 2:1 cocktails but in our experience they’re always watered down and they take FOREVER to come – so stick to the Bintang and you’ll be all good. Also make sure that you stay until half an hour after the sun actually leaves the horizon because that’s when you get the insane colours.

Shockingly, Gili Trawangan isn’t all about the white sandy beaches and views of crystal blue water, it’s also about what’s underneath the water. On my birthday we hired a private boat which we would 100% recommend hiring if possible. It allows you to spend as long or as little time as you want at the different sites. Plus, you can ask to set off an hour before the bigger companies, meaning you can explore the magical big blue without being kicked in the face by someone else’s flipper.

The Statues at Gili Meno: This statue was the highlight of my birthday!

We had been wanting to see it for ages and it didn’t disappoint. It was installed by Jason deCaires Taylor to encourage the growth of coral in the area and to encourage fish to return to the area. Make sure you get there before 8am however, because it’s much more spectacular without lots of other people being there.

Coral reef at Gili Meno: Just along the coast of Gili Meno heading south there is a collection of coral which has a lot sea life and which is worth a visit. You are able to swim between the coral and although it sounds silly… you feel like a fish.

Snorkelling for angel fish by Gili Air: Here again is another area for snorkelling on the northern side of Gili Air, where it is common to see angel fish. It was steaming with life but this issue was the current was extremely strong. We got swept down the side of the island and we genuinely couldn’t swim against it. The boat was there to pick you right back up again and the locals are aware of the currents in the ares – it was just a tad on the stressful side – but 100% worth a visit if you’re a strong swimmer, we’re not sure we’d would recommend it to people who aren’t.

Finding turtles: This is what we were looking forward to the most! Who doesn’t want to swim with turtles? Unfortunately we were a little too early in the day and most were still lying on the seabed napping away. We did spot a few but we would say add this last on our tour more towards the middle of the day. Also, you out in the big blue at this point so not much harm of running into people… there’s a greater likelihood of running into a shark… 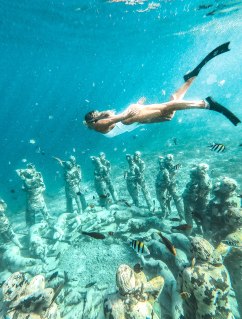 Hire Bikes: As we said Gili Trawangan is the biggest of the three islands so getting round is actually harder than you may think considering there are no cars. A bike while you are there is invaluable and will make your life a hell of a lot easier. It will also give you the opportunity to cycle the island which is beautiful from all different angles.

Indonesia Street Food: Cheap and cheerful little restaurant where you sit on authentic risen tables and best of all its located on sunset beach so great little place to pop after sunset before a ‘night on the town’ or bed.

Pearl Beach Lounge: This is probably one of the most expensive hotels on the island – well expensive by Bali standards – so this is where I was treated to lunch on my birthday.

We had a glass of prosecco while we looked over the ocean and it was just perfect! Plus, when we got the bill it wasn’t actually that expensive, so we would highly recommend this place if you have a more special reason to be dining or your simply celebrating it’s Tuesday.

Wilsons Retreat: Fab little restaurant on the northern side of the island where you dine on the beach and sink your toes into the sand. We had some of the beast traditional Indonesian food here and also some of the best Negroni’s!

People always ask us where our favourite country is and that’s an impossible question to answer... but when they ask us where our favourite sunsets are... Zanzibar for sure 💛
Zanzibar is known for its beaches but Stone Town (it’s main town/port) is definitely worth a few days! It’s got the authentic, crazy busy African vibes, with the markets and the winding ally’s but it’s also got a really cosmopolitan feel with the fusion food and rooftop restaurants. We loved it and we reckon you will too 💛
Happy Wednesday 💛
This week we’re heading to Zanzibar where we saw the clearest water we’ve ever seen, ate incredible African Indian infusion food and Camilla got hella sunburnt! Let’s gooooo.... 💛
Loading Comments...
Comment
×
%d bloggers like this: