What can I say about Finca Ca N’ai? That it is the most beautiful and relaxing place I have ever been? … Yes! Would that do it justice? … No!

When I travelled to Mallorca last week I was desperate to see the real Mallorca. See a side of the island I had never seen before. Stay in a location I had never stayed before – somewhere which was so far away from the large hotels complexes I had experienced before, that I would forget Mallorca even had them.

Well, big pat on the back for me… Finca Ca N’ai was everything I wanted and more.

We had just stayed in Sineu for a few days, at a beautiful little boutique hotel in the middle of town. If we’re honest we didn’t think could beat it. It had been so tranquil and relaxing, we were thinking we should have stayed longer. But no, as soon as we got to the Northern coast we knew we had made the right decision.

Before we heading to Finca Ca N’ai, we decided to explore Fornalutx, voted the most beautiful town in Mallorca, and only a 15 minute drive away from Finca Ca N’ai. It was breathtakingly beautiful and this set a president for the rest of our time here.

After, we had finished wandering the winding streets of Fornalutx we headed straight to Finca Ca N’ai. As we were driving up we were already oo-ing and ah-ing at the incredible mountain backdrop and lush trees all around. Then, we turned into the driveway and felt instantly relaxed.

All the rooms are spread out over the grounds, so once you’ve checked in you jump back in you car and head to you room, or should I say large studio apartment? Especially if we’re comparing to the sizes of rooms in London! As luck would have it, we were staying in a Junior Suite which was simply stunning. It had it own terrace and hammocks out the front. We couldn’t have been happier. 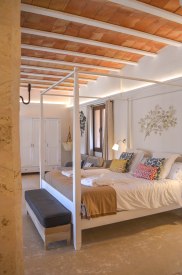 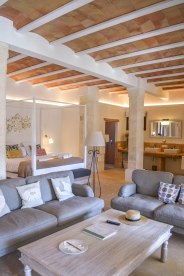 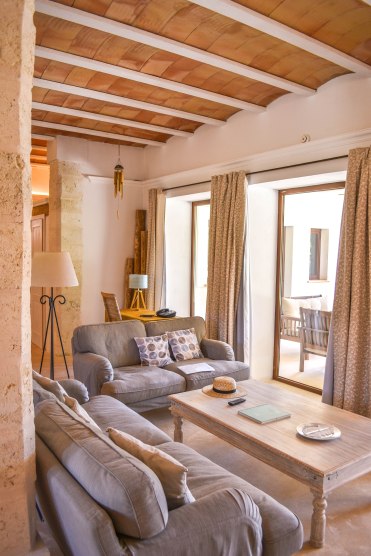 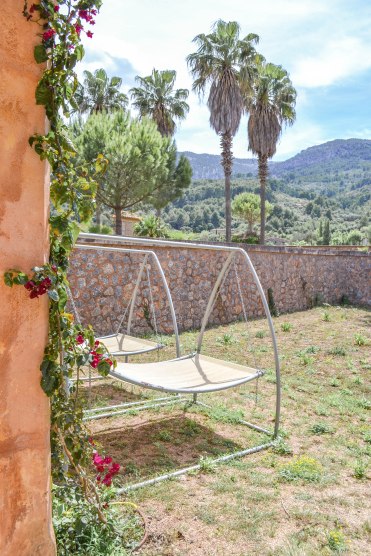 Finca Ca N’ai is an ancient farm near Sóller, which has belonged to the Morell family since 1723. It has been converted into an adults only, luxury hotel, with many of the rooms updated only three years ago. Finca Ca N’ai still retains the charm of an old farm house and plays on its rustic features, but has been finished with an artistic and modern twist.

After a day of exploring, and because the sun was shining bright, we headed straight to the pool. Finca Ca N’ai is in such a fantastic location many of the guest head out in the day, so we had the pool completely to ourselves for the first few hours. However, even when other guests did arrive it was as tranquil as it had been beforehand.

We spent the afternoon popping in and out of the pool, reading our books and walking over to the orange trees every now and again, if we got peckish, to grab a fresh orange. I’ve literally never tasted zest like it!

After the most blissful day by the pool we were invited to have dinner at the restaurant. We’d had a sneak peak during the day, and we’d eyed white table cloths, so we put on our best outfits and strolled 5-minutes to the restaurant. Of course, watching the most beautiful sunset on the way. Finca Ca N’ai has a wonderful terrace which you can watch the sunset from, so we ordered some cocktails and watched the sun throw out some beautiful oranges, yellows and pinks.

After the sun had said goodbye we headed down to the restaurant. You can sit either in the old wine cellars or you can op for the extension which is open and made of glass. We decided to see the final colour of the sunset and sat in the glass area. Now, we knew we were in for a little bit of fine dining, but we didn’t realise how good it was going to be!

For dinner we had the amazing… 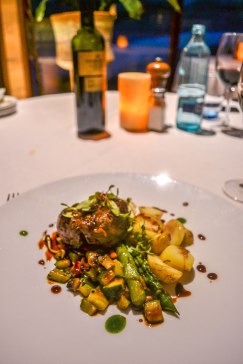 The quality of the food blew us away and quote Alex, “That was the best truffled steak tartar I have ever had in my life.” To give you context, Alex eats steak tartar a lot!

Then, after the most perfect dinner, there was time for one more cocktail on the terrace before bed.

After a lazy morning and breakfast with the most amazing view of the mountains, we decided to spend some time by the pool. All we heard for hours was the sound of water trickling and birds singing – it was absolute magic. When our bellies started to rumble – not sure why they did considering how much we ate at breakfast – we decided to head into Sóller.

In Sóller, we had a wonderful lunch at a beach side restaurant called Restaurant Ses Oliveres port de Sóller before heading back for, of course, a few more hours by the pool. I mean we were addicted to the tranquillity!

Again we lay there, relaxing until it was time to eat again, this time we were recommended Restaurant Nautilus, which had one of the best views of sunset in Sóller.

The next day it was time to leave and this genuinely broke our hearts. We had really come to love this rustic little farm. The people were charming, helpful and loving. The property was renovated to an incredible standard, all you could hear all day was bird singing, you had an exquisite backdrop of the mountains, the food was out of this world and I mean you could go and pick a fresh orange whenever you wanted!?

If you are looking for a non-touristy, relaxing, rustic retreat, you would be very happy at Finca Ca N’ai. I know we were.

Disclaimer: we were gifted this stay by Finca Ca N’ai in exchange for a review. However, everything we have said is completely our own opinion – and to be honest we would pay to go back here… it’s amazing!

In celebration of the AMAZING news about weddings in the newspapers this morning (they can go ahead with unlimited numbers from the 21st of June - wahhhh - praying that @thetimes has got this right 🤞) I thought I’d post one of our engagements shots on here. I posted one on @sistersisterlifestyles a few days ago and thought I’d share the love 💛
One of the seven wonders of Wales 💛
Last week we went on an amazing mini staycation adventure with this little man to Northern Wales and Snowdonia. It was his first Sister Sister Travels trip and he was an absolute little trooper (and a pretty good poser too!) 💛
Happy Friday beautiful people 💛
Loading Comments...
Comment
×
%d bloggers like this: