So, when we used to think of Mallorca we thought of Thomas Cook and First Choice all-inclusive holidays, where you do midday aqua aerobics and can hear the screams of the ‘kidz club’ every morning. We also thought of Magaluf, where you drink out of buckets with multi-coloured straws and then find an Irish Bar the next morning for your Full English hungover cure for days on end.

We’re not dismissing these holidays, both have played a huge and mostly fun part in our lives up till a few years ago. But now, if we’re being completely honest with you, they sound like pure hell. Yes, having unlimited food and drink with no worries can be great and yes, having a crazy nightlife can be great. However, this is so far away from where we are in our lives at the moment and in our ‘travel journey’ – yes we just said that – it had kind of put us off visiting Mallorca.

This started to change last year when we were invited on a four day sailing trip with In Adventures. We sailed around the south of the island and were shown the stunning coast line, which in fact wasn’t covered in big, tall, thousand room hotels, or bars with neon flashing lights. This is when we started to think maybe we had judged Mallorca a little too harshly and maybe there was a place for us on this island.

Last week I travelled back to Mallorca with Alex (my partner), while Camilla was away at a wedding in Crete, to see if this island had more than I gave it credit for. Luckily, I am more than happy to admit that I was completely wrong!

Mallorca is a dream! It’s is more than a dream! It’s a turquoise, golden, winding alleyways, divine food, rolling hills and magnificent mountains dream which I am already dying to go back to. While we were there we didn’t see a big shiny hotel, we didn’t hear any pumping music, we were simply lost in its rustic charm.

Below I have written about some of the places which we visited while we were there. This is by no means an extensive list. There are so many other places which we were dying to go, but just didn’t have the time.

All these places felt special to me, felt real, and gave me what I wanted out of a holiday – which is culture, adventure, local, quiet, beauty, architecture and good food. So, if that’s what you’re looking for then I think they’ll suit you fine too.

The first place we headed on our little adventure was Sineu, a very sleeping town in the centre of the island. When I first told my Dad I was going there he was like, erm why? There’s nothing in the centre of the island and you’re nowhere near the sea!? What are you going to go? Well, exactly. There wasn’t much to do in Sineu, it was a sleepy little town with beautiful, rustic old buildings on little winding alleyways surrounding a cathedral in the middle.

It was so charming. Every hour the church bells would ring and it was the loudest thing you ever heard. The rest of the time, I kid you not, all you could hear were birds singing. There were hardly any tourists, you would see a few biking groups as the cycled through, but that was about it. This meant that you could walk around town and not see anyone for forever, you could sit in a little bar and have a glass of wine (for only €2!) and be the only people there. We were in Sineu for two days and by the time we left, we had already started to recognised and greet the locals.

What made our stay even better was the little oasis of a hotel we stayed in, Can Joan Capo. It was the most charming hotel with amazingly friendly staff, delicious food and the most relaxing courtyard. We have to say the booking process was less than desirable, but the staff at the hotel were actually fabulous! 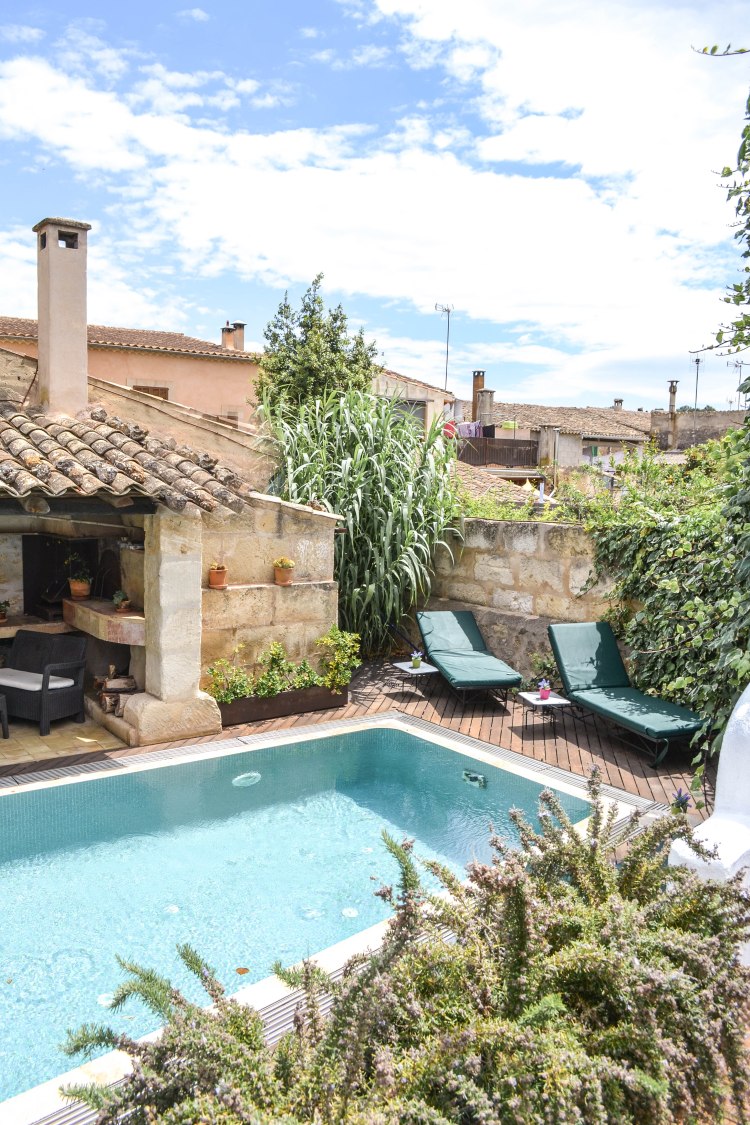 Plus, if you need a little bit more action then maybe Sineu on a Wednesday is more to your liking, This is apparently when the town comes alive with a market which sells everything. We weren’t there for this, but we have heard it is quite a sight. 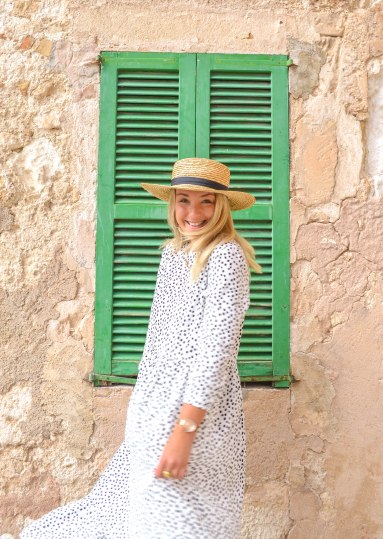 On our drive between Sineu and our next long-term stop Soller was Fornalutx. Plus, with it being voted the prettiest village in Mallorca we couldn’t not go!

I mean there’s really not much more I can say about it. Obviously, I haven’t seen all of the villages, but yep, it’s the prettiest village I’ve ever seen, like anywhere. It’s a golden dream built into the side of a hill, giving you the most amazing views over a valley and onto another hillside. The little winding alleyways are littered with multicoloured doorways, vibrant flowers of all different shapes and sizes, pebbled floors and dusty textured walls – it’s literally what dreams are made of.

Squished into this little town are churches, quaint shops, restaurants, cafes, an ice cream stall and a mini square. It is the most idyllic place to spend an afternoon and I can’t recommend it highly enough. 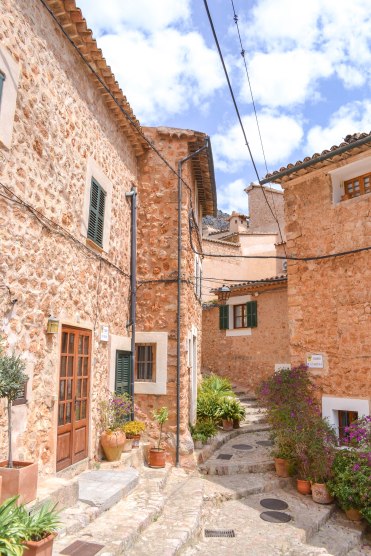 Our next long term stop was in Soller, where we were lucky enough to be staying at Finca Ca N’ai, a beautifully converted farm house. Located in the middle of an orange field it just makes you want to never leave, but we’ll write a whole other post on that. It’s too good not to stay there.

Soller and Puerto de Soller are slightly more touristy spots than the places we’ve discussed so far. However, they hold an air of elegance and charm about them, so it’s far from large hotel complexes and booming music until 5am. They have a collection of beautiful, quirky shops, sophisticated restaurants and a roof top terrace every now and again.

When we were in Soller we did spend a lot of time at our hotel, simply because it was too beautiful not too. However, we did venture into Puerto de Soller a few times to eat by the sea. Why would you not want to to that?!

On our first outing we were lucky enough to enjoy lunch at Restaurant Ses Oliveres, where the Paella was freshly served right in front of you and the rose was freely flowing. You were also able to enjoy the most beautiful view of the sea as you were right down on the sea front, close enough to the vintage tram nearly nipping your toes as it went by.

Our second outing was for a sunset dinner at Restaurant Nautilus, which was right at the top of a shear-faced cliff edge. They view over the ocean was mind blowing, pair that up with an insane sunset and you have yourself maybe the most romantic meal ever!?

Deià, like Fornalutx, is a beautiful hillside village on the North cost of the island. Again, it is full of winding cobble streets, pretty little restaurants and shops, the prefect place to stroll around for an afternoon.

Unfortunately, as we had to rush back to Palma to catch a flight, we were only able to wander round this little village for half a hour. But, there were so many more nooks and crannies which we wanted to rush to! All the more reason to go back to Mallorca for the tenth time.

The reason why we rushed the village was because we have been recommended a little cliff side restaurant in Cala Deià. A short, but windy drive and hike later, you reach Ca’s Patro March. We had been promised fresh fish and oh boy we were on our way!

Once you get to the bottom of the winding roads you get to a little car park. You can’t park by Ca’s Patro March. However, it is only a five minute walk, if that, to the cove it is located in. Once you arrive you will see two restaurants, one on the cliff on your left and one on the rocks by the beach. Head up to the cliffside, you may have to wait for a table, to be honest, you may have to wait half and hour for a table – but it is worth it! We sat right on the waters edge and watched the waves crash below us as we ate some of the freshest fish we had ever tasted! True highlight! 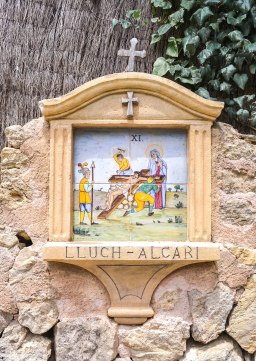 Finally, Palma. Yes I know Palma isn’t exactly different, I know it’s the biggest city on the Island and I know that the airport is there.. But, so many people come to Mallorca, leave Palma, never to come back again – which is sacrilege!

Palma has a beautiful energy and a cathedral, therefore somewhere which should not be written off!

We were only there for an afternoon, we walked around the old town, ate ice cream and while we stared in aw at the cathedral before heading back to Sineu. Perfection.

4 thoughts on “Five different places to go in Mallorca”