After working with the Three Cheers Pub group before, we were lucky enough to be invited to their newly renovated site in Balham, The Bedford. Now, a couple of years ago if someone had invited us to travel ‘south of the river’ we would have laughed in their face. The transport links were a nightmare and, in our opinion, there wasn’t much happening ‘all the way’ down there. However, we have to admit we were sorely wrong.

A couple of our friends moved down that way, which meant we were heading there often and spending time in places like Wandsworth, Putney, Balham and Clapham. We realised that it’s pretty lively with less of the tack Central and West London can sometimes give you. Plus, getting into Central London is actually really easy – I think trying to get there from the deep, deep west might have been a contributing problem.

Anywho, fast forward a couple of years. I now work ‘south of the river’ and we both spend a considerable amount of time there with friends. So, when we were invited to the opening of The Bedford we were pretty chuffed.

We had never been there before. However, we had always heard rumours and tales of this amazing music and comedy venue in a pub. Turns out this legendary venue (which we’re sure many stories have been told about) was The Bedford.

Since our visit, we have to admit we are fully on The Bedford bandwagon. We would go as far to say The Bedford is not just a pub, not just a hotel, but a destination in itself. It’s a reason to travel to London and a place for Londoners to go themselves. No matter how long they have lived here or how many times they’ve already been. We LOVED it! And this is why… 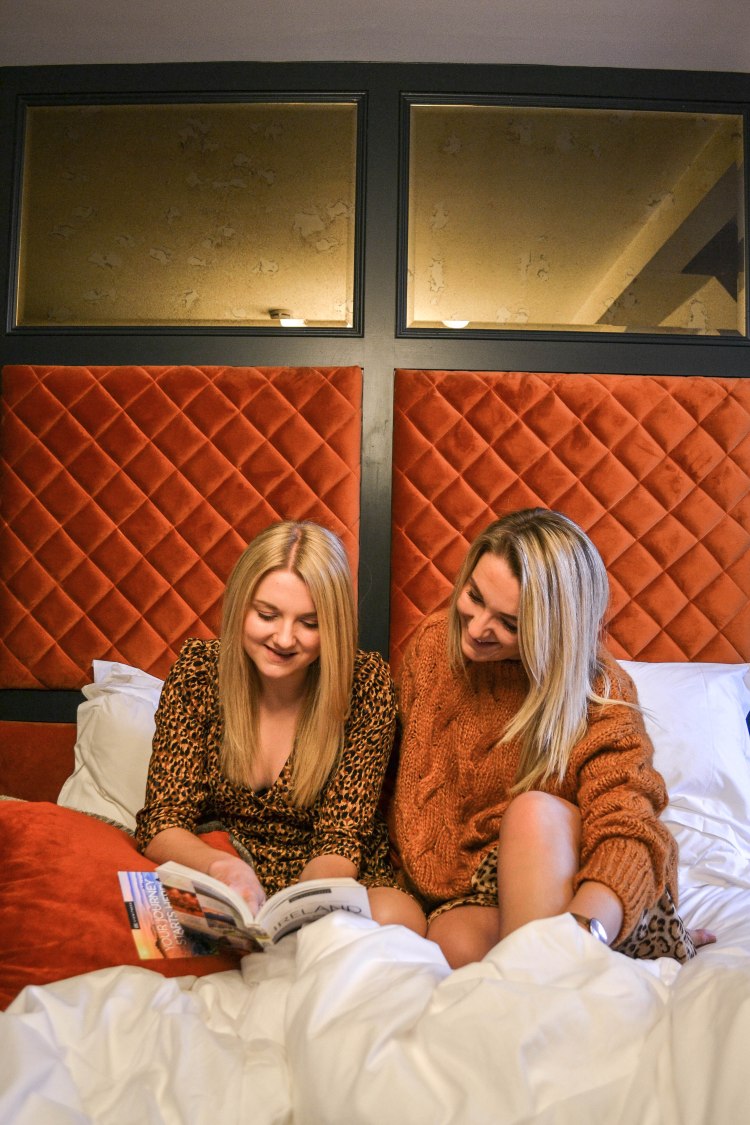 An evening at The Bedford…

After work we both quickly jumped on the tube and headed to The Bedford. It’s literally only a minute walk from Balham Tube Station, so you’re quickly in the energetic, pulsing, vibrant main bar itself.

When we were first shown to our room, we were blown away. We knew it had undergone a facelift. However, the opulent, classic and bold design was a dream. Plus, the absolute show stopper was the bath! Oh that bath. Situated in front of huge gold mirror was a roll-top bath with Victorian gold taps.

Now, if we’re being completely truthful, we didn’t actually get round to having a bubble bath. But, we spent a lot of time in the bath fully clothed!

After drinking in the dream that was our bedroom we headed down to the pub. Camilla closed her eyes pretty much the whole way down as the hallways are covered with old circus pictures, many featuring clowns and she’s a bit of a wimp in that department. In fact, The Bedford has a full circus theme running throughout the pub and rooms, which only adds to the character of the place.

However, before we made it all the way down to the bar, a red, round room with beaming lights caught our eye. We obviously had to take a closer look and by chance we had found the theatre. Plus, on the grapevine, we’d heard there was a show happening that night with some pretty big names! However, we didn’t have tickets.

So, as soon as we sat down for dinner, before we even ordered our food which is most unlike us, we asked if we could be squeezed in somewhere. The energy and fun loving nature of the pub was obviously rubbing off on us and we wanted, we needed to see this show! Luckily, a few moments later they said we were in and it was time to focus on the food.

As you probably know by now, we absolutely love pub food and The Bedford did not disappoint. To be fair after the delicious meals we had already experienced at The Bedford’s sister pubs, The Tommyfield and The Princess Victoria, we knew we were in for a good ride.

We started off with the Baked Camembert (because who can resist melted cheese in the winter) and the Cured Salmon with Beetroot Carpaccio, Orange and Horseradish Cream. Something a little fresher and lighter as we knew we were in for three courses. We have to say the Camembert was the show stopper. It had been baked in the bread we were about to dip in it. Naughty, but heavenly!

For mains we took recommendations from our waitress, Mihaela, and we are so happy we did. We always find it best to ask what they recommend before making our final decision, as they know the menu better than anyone.

We opted for the Chorizo and Goat’s Cheese Pizza – stone baked of course, and the Beef Short Rib Ragout. Both were absolutely amazing. However, gun to our heads, the Beef Ragout was the clear winner! 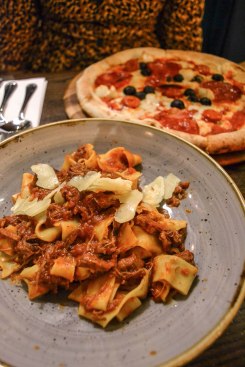 To finish we squeezed in – and I mean squeezed in after all that cheese! Fried Nutella Gnocchi with Banana Ice Cream and Apple and Cranberry Crumble with Custard. Again, two delicious dishes which we’re glad we made room for. After we’d wolfed down the dessert and maybe a final glass of wine, we headed back to the theatre.

Now, in all the excitement of getting tickets last minute we didn’t actually know who was on, apart from the fact there were some ‘pretty names’. But, when we arrived we were lucky enough to meet the owner of Banana Cabaret. She told us we were seeing; Shappi Khorsandi, Simon Evans, Mike Gunn, Addy Van der Borgh and special guest, Rick Hall – who just happened to be around the corner and thought he’d pop in!

We can honestly say we had fabulous evening. We laughed hard, made friends with the people around us and maybe drank a bit more wine. By the end of the show our cheeks hurt from laughing and we were on cloud nine.

Who’d have thought in this little corner of Balham, we would have such a delicious dinner, full of flavour and wine, and a night full of laughter and fun. Even better, we then had a dreamy room to head back to. Which was around.. oh I don’t know… a 30-second walk!? Can you think of a better Friday night set up!?

Now, one reservation we did have was sleep. We’re going to try and sleep in a rowdy pub – hmmm, how’s that going to work? But, we can honestly say, hand on heart, belly full of wine, we could not hear the noise from the pub once we were in our room.

We were up bright and averagely early the next day. Luckily, we didn’t have sore heads, but we ‘knew we had drunk wine the night before’ – if that makes any sense to anyone other than us? But no fear, The Bedford breakfast was here!

We made the long, 60-second walk down to the bar and were impressed by the decor of the main area. The night before we had been so swept away by the energy, the food and the show, we hadn’t completely taken in the artwork and ‘funkiness’ of the main bar.

Even after our three course dinner the night before, we were still pretty ravenous. For breakfast we ordered the Salt Beef Hash with a St. Ewes Egg, baby Spinach and mustard sauce, a bit on the adventurous side we know. Plus, of course, the classic Poached Eggs on Avocado. We seriously believe if any brunch place didn’t serve this classic, they would go straight out of business.

Both dishes were the perfect cure for our; ‘we knew we had drunk wine the night before’ heads. Obviously with a cloudy apple juice on the side – living it up!

Overall, our 18-hours with The Bedford were fantastic! We can wholly recommend it to both Londoners and non-Londoners alike. The vibe of the venue is electric, the decor is retro and opulent, without being fancy or arrogant. The theatre is fun and intimate. Plus, the rooms are cosy and stylish. We would go back every Friday night if they would let us! 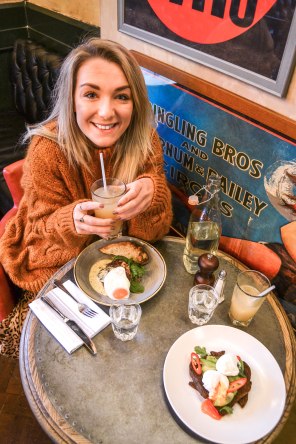 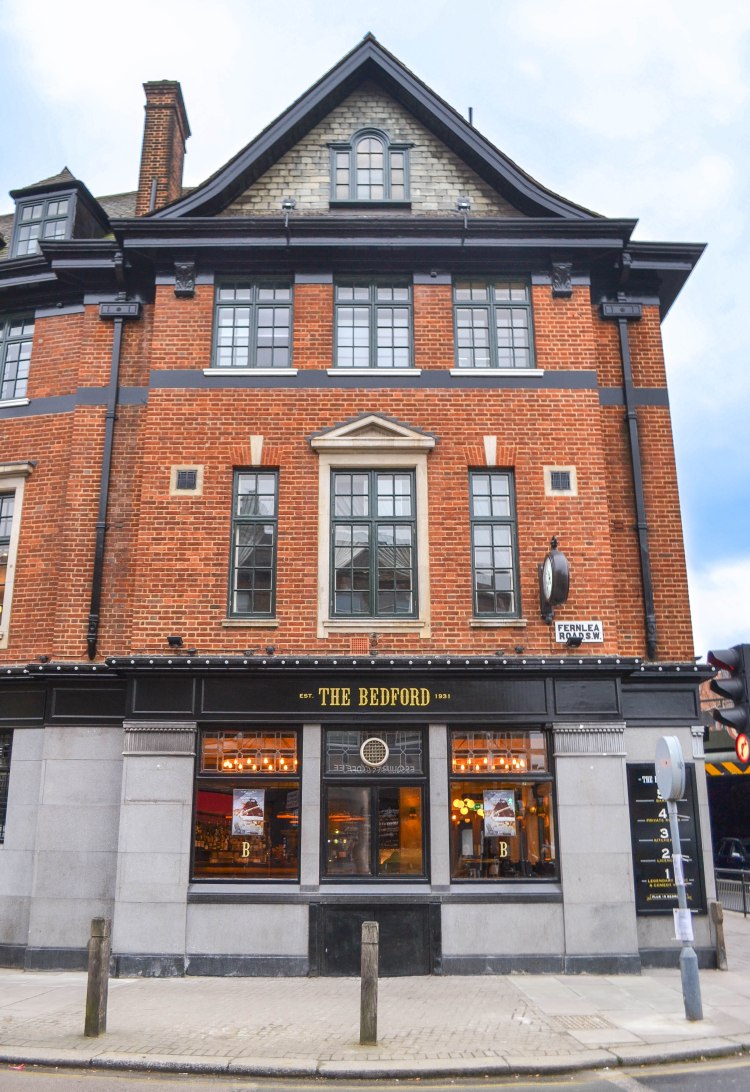