Now, whoever comes to London and says that the tube is hard to get around needs to go to the Brecon Beacons and try navigating the roads and hikes there – nightmare – but on the other hand, one of the most beautiful places in the world to be lost, especially in autumn, so we still think you should go…

We had a spare few days and flights out of London were silly expensive because it was half term, so we decided to explore our own backyard a little further. I mean we still technically left the country, but the U.K. all merges into one really so it’s still our backyard.

At only a three-hour drive from London, the Brecon Beacons was calling our names. We have explored Snowdonia and the Lake District before, so this was number one on our walking hit list. We love being out in the crisp, fresh air, walking on the hills and then heading back to a cosy hotel with a glass of red wine and an open fire; autumnal heaven. Another plus point was that as we were booking at such short notice, we were able to check the weather and see it was a rain free weekend – we like hiking, but hiking in the rain is another story…

So, after picking up our car from Enterprise Rent a Car the day before we were up at the crack of dawn (7:30 which is the crack of dawn at the weekend) to start our journey to the Brecon Beacons. The traffics gods were kind to us and after a quick snacks and petrol pitstop we were there in just over three hours. You know immediately when you hit the National Park because everything just looks that little bit prettier, that little bit greener (or in our case oranger) and you start spotting castle ruins.

As we were entering from the east of the national park, we thought we would tick off Llanthony Priory and the Black Mountains which hug the north-easterly borders.

Our first stop was Llanthony Priory. Now, I would like to say that our inner compasses are pretty decent, our Dad likes to boast that we have the Holroyd Compass inside us. However, as all millennials do, we use Google Maps to get us pretty much everywhere. In London you have signal wherever you go, you can even get signal when your 40 meters underground on some of the tube lines. We’re not used to not having signal. But obviously, as luck would have it, the time when we are most in need, driving around little welsh country roads, our signal says goodbye. Hmmmmm. 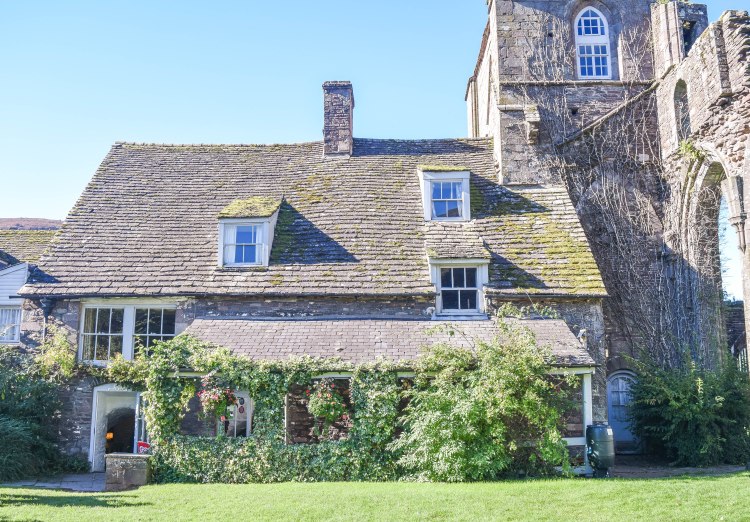 We drove and drove and then we remembered something, which again is different to London… we can talk to someone we don’t know, a stranger (keeping the car doors locked obviously to eliminate stranger danger) and ask for directions. This is when we realised that the Brecon-Beacian people (we made that name up but we totally think it works) are the warmest, most helpful people, and this gentleman was not the last person we were going to need help from!

Eventually, after some good directions and pretty tight roads, we arrived at Llanthony Priory and it was beautiful. Nestled in the hills, this old priory missing its roof is picture perfect. While we were there, we saw people going for walks in the surrounding hills, families have picnics and people learning about the history of this 12th Century beauty. You could stay here all day really, but we had a few more things to tick off our list. 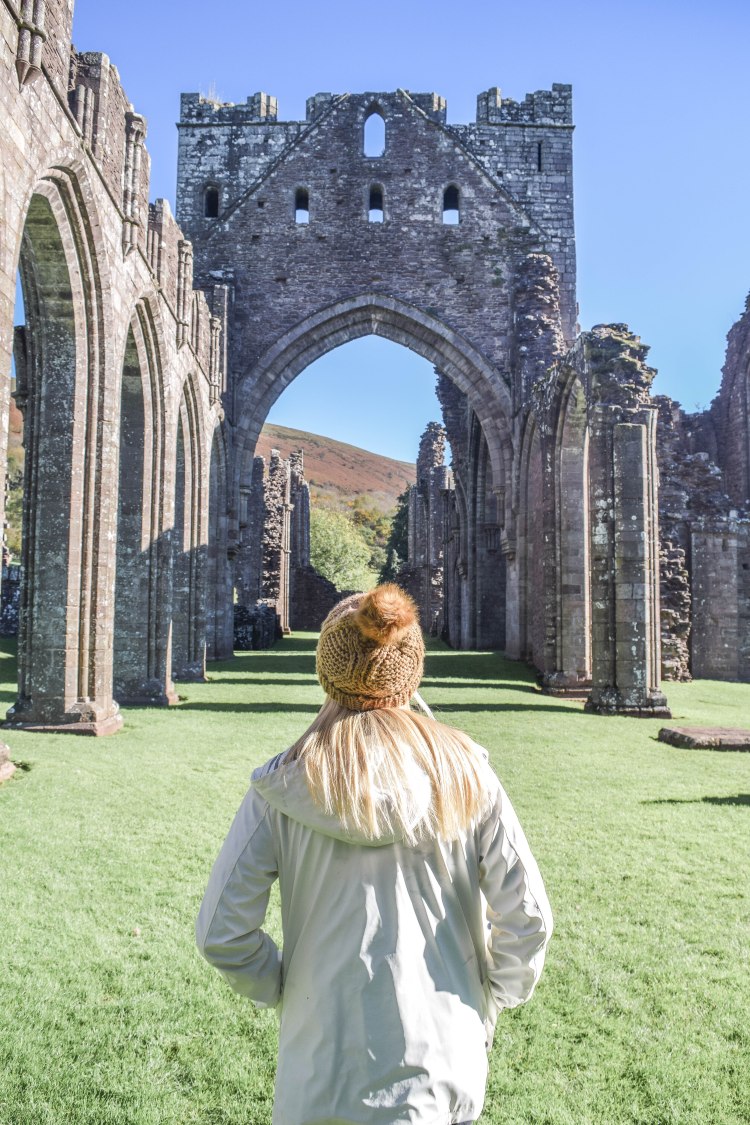 Our next stop was the Black Mountains (not to be confused with the Black Mountain – no ‘s’ further to the west). Due to our continuing lack of signal we stuck a finger in the air and continued to drive north. We knew it was north somewhere, so off we went (in hindsight we would have printed some maps off… so we suggest that’s what you do).

After driving for half an hour North and struggling to find what we were looking for (the Grwyne Fawr Reservoir) we pulled over into a pony hire farm. Take two of talking to a stranger. After some very helpful information, from a very warm lady and her kitten, we were driving back the way we had come to get over into the next valley.

Eventually we arrived at a dead end in the Black Mountains close to the Grwyne Fawr Reservoir where we pulled over and stared our first hike. We walked up to the ridge of the valley and all along the side to the Grwyne Fawr Reservoir. Looking down into the valley was a beautiful sight as all the colours were changing for autumn. You could see all shades of red, oranges and browns with the last of the greens peeking through. We wanted to walk backwards the whole time, so we could keep staring at it. We made lots of new wooly friends along the way too and we pretty much had the valley to ourselves.

It was around a 45-minute walk to the Grwyne Fawr Reservoir however, the weather had started to turn (the weather man lied to us) so once we had taken it all in, we headed back to the car pretty sharpish. 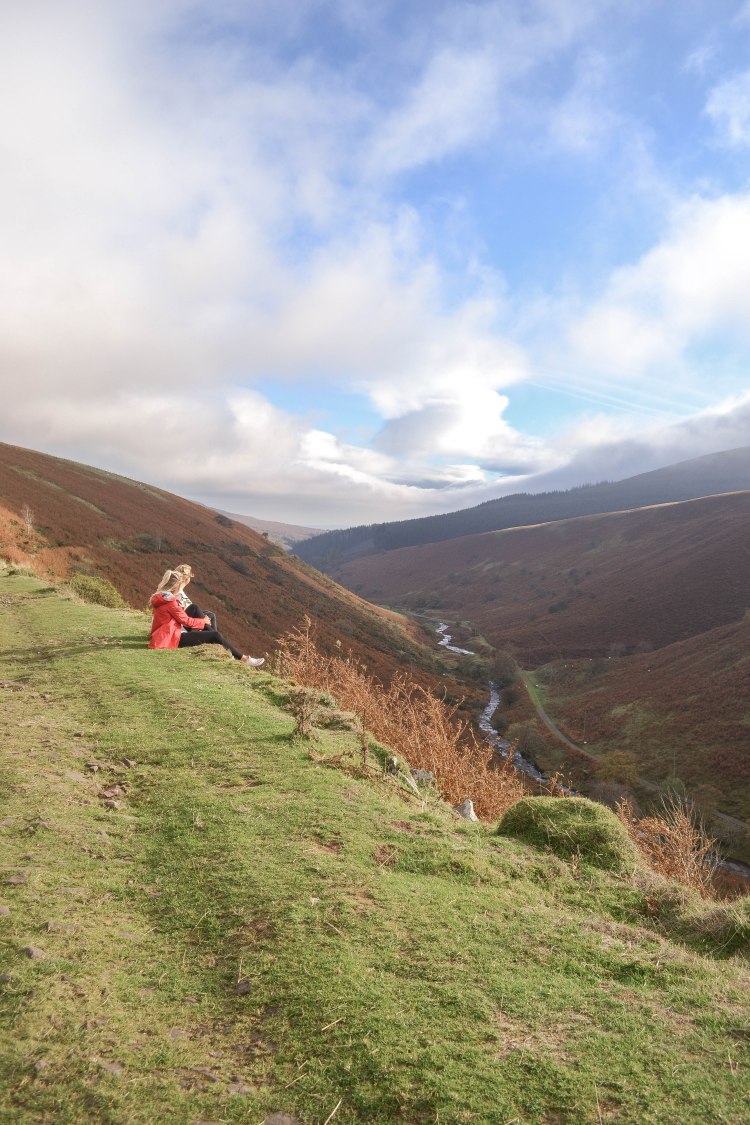 After an early start and lots of exploring we were ready for our hotel. We had arranged to stay at Gliffaes Country House Hotel. It is a stunning hotel set within a beautiful 33 acres plot with views overlooking the river Usk. We arrived and were greeted by a warm open fire and a glass of red wine, we instantly felt at home.

Gliffaes Country House Hotel is traditional in many respects. They ask you to change out of your walking gear for dinner and you order from the bar before you are taken through to the dining room, therefore the chef has time to prepare each meal individually and from scratch. After setting our luggage down in our gorgeous, little room, we were more than happy to sit in the bar.

Here we met James, and he has to be the crowning jewel of Gliffaes Country House Hotel. He was extremely warm and helpful, looking at maps with us for ages, planning routes for the next day and making suggestions for sunrise we hadn’t even known about. He even gave us a heads up on where we might be able to find the welsh mountain ponies, although it was not meant to be.

For dinner Gliffaes Country House Hotel offers an amazing array of food, using fresh and seasonal ingredients sourced locally. To start Camilla opted for the Confit Duck with a Hen’s Egg and Leek & Potato Blini, while I had a delicious Trio of Salmon. Next, we went for hearty and warming mains of Local Pheasant and an Assiette of Lamb. After a delicious dinner, beautifully presented, we retreated to our rooms, preparing for sunrise.

We really wanted to catch sunrise because no one ever regrets getting up for sunrise, unless it’s cloudy. But, true to form we got lost. Even after James gave us very clear instructions, we couldn’t find the car park (and this time we had signal – it’s all quite embarrassing really.) But, after a quick detour into a farm and a chat with the kindest woman (stranger number three) we found the car park and climbed Cefn Moel.

Favourite quote of the trip, in a thick welsh accent: “Lucky you ‘aven’t got any fog this morning you ar'”… you might have had to be there…

It was tight, but we made it for sunrise and the oranges we got that morning over the ferns were beautiful. You really never regret getting up for sunset. This is also the rumoured location of the welsh mountain ponies; however, they must have still been asleep somewhere… maybe you’ll have more luck!

Sadly, it was time for us to leave Gliffaes Country House Hotel, however, it was time for our biggest walking challenge of the trip; Pan Y Fan at 886 meters. James had kindly given us a book with all the walks included, however being the highest point in the Brecon Beacons it wasn’t too hard to find. 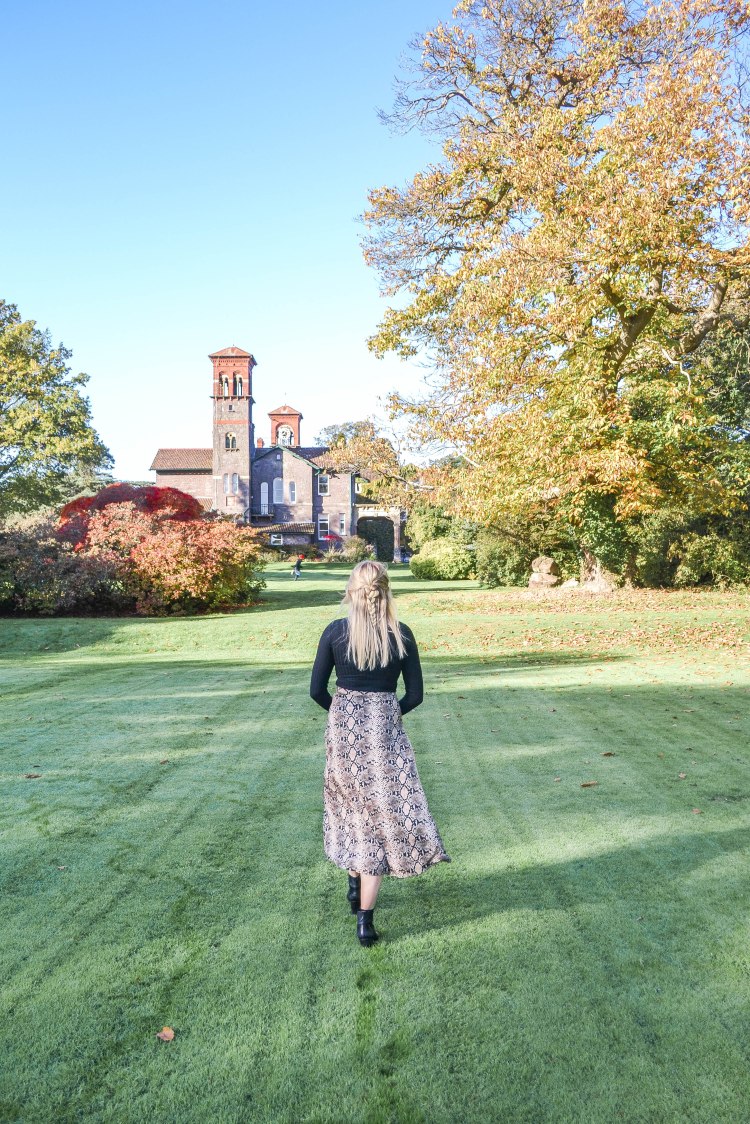 Our plan was to hike up to Pan Y Fan, across to Fan Y Big and then back to Pan Y Fan and back down. On a map they didn’t look too far apart, so off we went. We’re not the most competent walkers in the world but were okay, so we didn’t consider that summiting three points (which ended up being four) was going to be extremely challenging.

Getting to Pan Y Fan was tiring but a lovely walk, and as everyone was going there it was pretty easy to find. Our next challenge was finding and getting to Fan Y Big. We used our tried and trusted technique of asking someone (stranger number 4), they pointed to a mountain and we headed in that direction, only to summit and realise, it wasn’t the right one, we were on Cribyn. Time to move back to google maps…

We had our hearts set on reaching Fan Y Big because we wanted to see the famous ‘diving board’ at the top, so we consulted with Google Maps and realised we were only 30 minutes away, although this included another hefty climb and we were starting to lag without any snacks. However, we were determined to get there so off we went and after some huffs and puffs we reached the top of Fan Y Big. The view from the ‘diving board’ was amazing and we were so glad that we had pushing ourselves to carry on. Although, now we were officially exhausted and still had to re-summit Pan Y Fan to get back to the car, we decided to walk around Cribyn our extra summit, we didn’t need that in our lives again.

By the time we were walking back down to the car from our second summit of Pan Y Fan we were exhausted. What we had planned to be a 3-hour hike turned into 6 and a half hours and we were grossly unprepared with not enough water or snacks. Luckily, when we arrived back in the car park there was a van selling snacks and we’re not ashamed to say we had two chocolate bars, a packet of crisps, a can of cake and a bottle of water… each.

Even though the toll on our bodies was more than we anticipated, and we missed seeing the waterfalls to the south of the Brecon Beacons due to timings, the views from Pan Y Fan and Fan Y Big were breathtaking, you could see for miles and miles and if we could walk them again tomorrow, we would, but obviously with more snacks.

As darkness was nearing it was time to head back to London after an amazing two days in the Brecon Beacons.

We highly recommend going in Autumn to see the change in colours. It is truly beautiful. 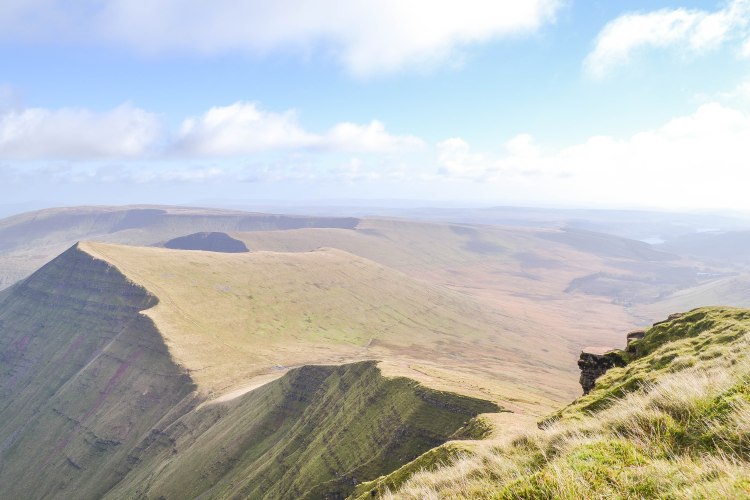