Sao Paulo was a rarity for us, normally as soon as we step off the plane or boat we are already falling in love with a city, but when visiting Sao Paulo, it took us a while to find the charm. After the first few hours we were concerned this was going to be the first place where we would go home and say, ‘nah give that a miss,’ but after putting in some hard graft we started falling. Sao Paulo in our opinion is like a cat, it makes you work and work for its affection, but once you’re in and its accepted you, there is so much it has to offer.

Now, this rough start wasn’t fully Sao Paulo’s bad, we (mainly Natalie) had done some bad planning. Firstly, we had arranged to go during a public holiday so pretty much everywhere and everything was shut. All the attractions and sights which we had wanted to explore were a no go’s and we were stuck in town without a clue and worst of all no wi-fi to fix that – problem number one. 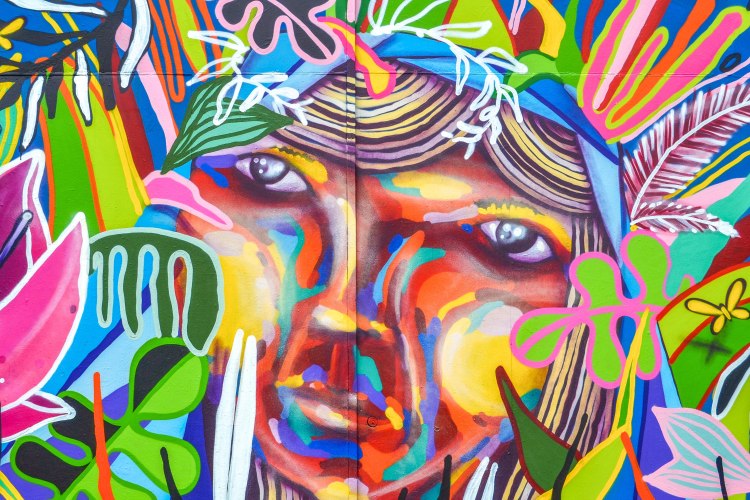 Secondly, it was Gay Pride, something which in many other counties would be a huge positive and an event you would actively seek out or go because of. Unfortunately, not here, Brazil still has a negative reputation for its attitude towards LGBT, with one of the highest hate-based LGBT murders statistics in the world. This meant there was a slightly tense atmosphere in the air. Luckily, we didn’t see anything which confirmed its reputation and we’re sure travelling here and being part of the LGBT community would be completely uneventful, however, tense would be the word.

Finally, in preparation for the Rio Olympics and as a test dummy city, the favelas surrounding Sao Paulo had just been cleared so a lot of the residence had moved into the capital having unfortunately been made homeless. This sight was chilling as you couldn’t walk two steps with nearly tripping over someone on the sidewalk which also broke our hearts. Not an ideal set-up to say the least. Clearly, we hadn’t chosen a fantastic time to go and it did affect our first impressions of the city. 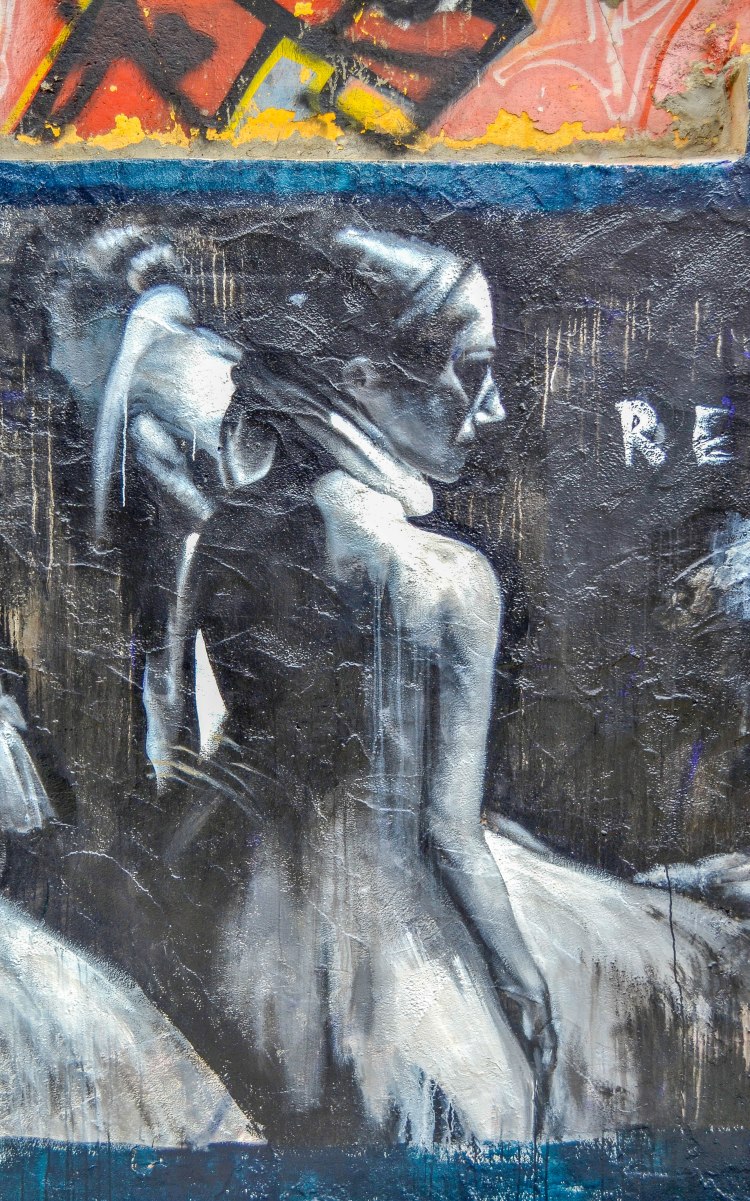 We were staying in the business district so after a very unsuccessful trip into the centre we quickly escaped back to our hotel. When travelling we enjoy being in the thick of things so retreating back to the hotel felt almost defeatist and that we were hiding in our luxury castle not really getting to know the raw city. We have travelled our fair share of tricky countries such as India, Jordan and Sri Lanka (while there was still tension from the civil war in the north) without concern but here we just felt a little unsettled. Award for the number 1 travel bloggers of the year we think not.

On the other hand, Sao Paulo has some amazing, modern and inexpensive hotels to pick from so (embarrassingly) we had an afternoon by the pool and drinking caipirinhas – something we drank way too much out there! But they are delicious so who can blame us? 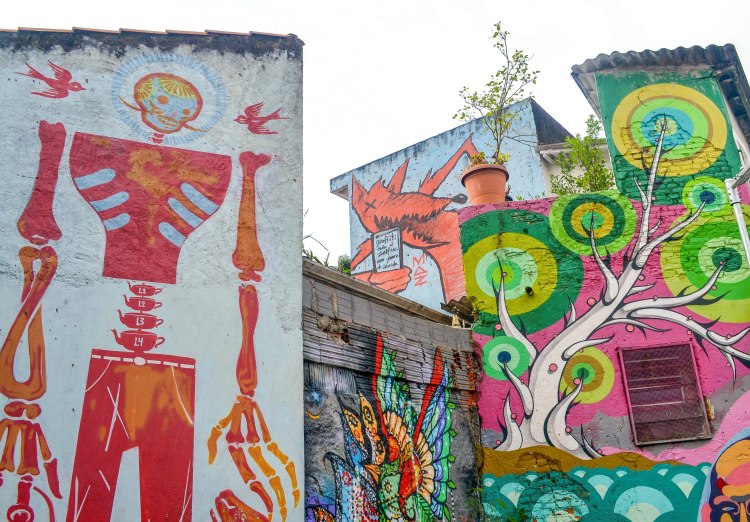 For dinner we decided to stay in the same area and headed to Hotel Unique. It is a stunning, modern and artistic hotel with an incredible rooftop bar and restaurant which serves a Japanese-Brazilian fusion menu – to die for. The views over the city at night were quite spectacular and we couldn’t recommend it enough. Sao Paulo has a slight resemblance to NYC or Mumbai at night time with its high-rise buildings and twinkling bright lights. It is not a budget restaurant but worth it so… when in Sao Paulo right!?

After an amazing evening, the next day we strapped on our shoes and headed back out. We were determined to take on Sao Paulo and find our flavour. We had read about a huge art district which housed the famous Batman Ally. Yes, it has an awesome name!

Batman Ally we had heard was an amazing ally covered head to toe in street art. Right up our ally… yes, we did just make that joke! Now, it wasn’t the easiest thing to find, poorly signposted and with a lot of the locals looking at you blankly when you mentioned it, it took us a long while to find. At some points we though it could be this crazy urban myth that people search for their entire lives for and never found. However, finally, we started to see colour on all the walls, getting more and more intense as we continued to walk. Suddenly, we turned a corner and there it was in all its glory.  We spent hours walking up and down. There was so much to see, and each piece had its own draw. This was our light in Sao Paulo and something which cannot be missed if you plan on visiting the city! 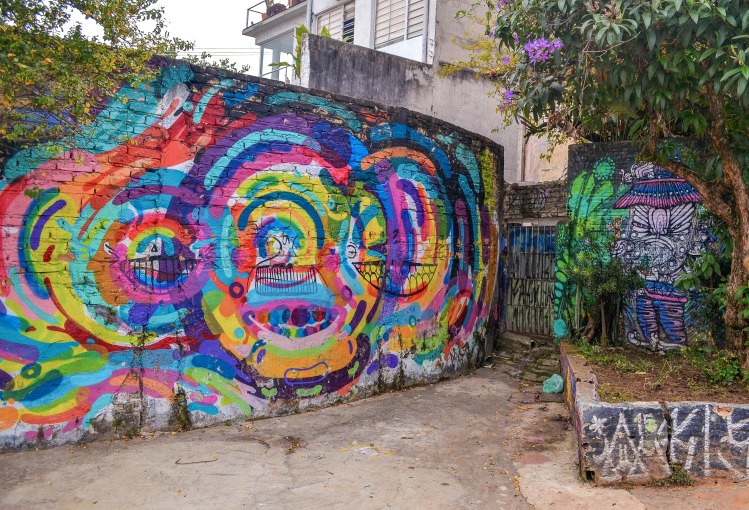 Annoyingly, soon after we had to head to the airport to fly back to Rio. After the inspiration of Batman Ally we were starting to see amazing street art covering every corner of the city, but it was too late and time to leave. After a taste of its charm we were genuinely gutted that we had to leave, we had just broken through the wall and wanted to keep on running and see as much as we could, now feeling more comfortable and energised by the city. We scolded ourselves for being so shy and retreating back to the hotel the day before and not pushing on and finding this side sooner.

However, is it so awful to admit that you just aren’t feeling a city very much? As travel bloggers we feel like it’s important to give every single place a positive spin and in the end, this was actually quite an easy task with Sao Paulo after visiting Hotel Unique and Batman Ally. But, sometimes you might not have one and we’re realising that it’s more important to give a true reflection of the city through our story than claiming every little part is completely amazing. For example, we have a number of friends who live in the north of England and when they come to London to visit they say its too busy, to noisy, to hectic and people are rude (that we disagree with, but we’re not rude, just have places to be) and we adore London. So, is it so bad to say, ‘not for me but maybe for you?’ 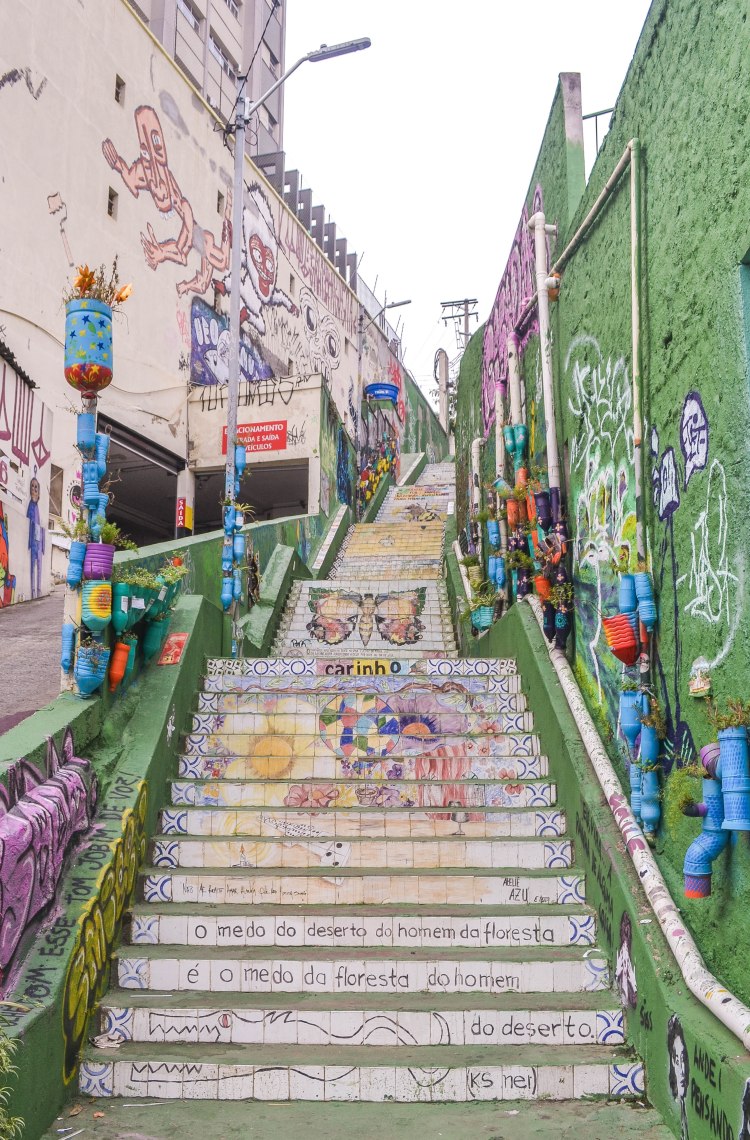 Overall, Sao Paulo was hard work, but we believe we found its charm. We wish we had had longer there to explore and it’s not somewhere we would rule our ever going again.

Happy Saturday 💛 . . . Last night we landed in Norway because this weekend we are husky sledging in the mountains! Eeeek! We’ve been looking forward to this trip for months and we’re so excited! We’re currently driving through the Norwegian country side which is head deep in snow to get to our camp! We can’t wait to share it all with you! Smiling faces all round! 💛 . . . What have you got planned this weekend? 💛 . . . 📍 Budapest, Hungary #sistersistertravels #budapest #budapesthungary #hungary #ststephensbasilica #sunsetporn #travel #travelblogger #travelgram #instatravel #sheisnotlost #girlsthatwander #darlingescapes #thetravelwomen #ladieslovetravel #femaletravelbloggers #womenwhoexplore #wearetravelgirls #wearetravelladies #citizenfemme #travelgirls #wegotoo #weworktotravel #iamtb
Dance it’s Friday! 💛 . . . Today we’re heading off on our second adventure of the year and we’re heading to the land of the snow! We’re going somewhere we’ve been dying to go for ages to work with a company we’ve been wanting to work with for ages! Can’t wait to share it all with you! 💛 . . . Can you guess where we’re going? 💛 . . . 📍 Barcelona, Spain #sistersistertravels #instapassport #passionpassport #openmyworld #travelawesome #traveltagged #dametraveler #bbctravel #beautifuldestinations #girlsthatwander #barcelona #kissingwall #spain #visitspain #españa #sheisnotlost #iamtb #fridayfeeling
We are full on view hunters! We love searching out the best views wherever we can! There’s nothing better than an incredible view over a city watching everything unfold below. In Budapest... this is Fisherman’s Bastion on the Buda hills 💛 . . . You can see the river wiggling through the city, the Parliament Building in all its grand glory, the spikes of St. Stephens pricking through the roof tops and some crazy beautiful houses dotted around. We would have spent hours up here is we had longer in the city just sitting and taking it it but... exploration calls 💛 . . . Are you a view hunter? 💛 . . . 📍 Budapest, Hungary #sistersistertravels #budapest #budapesthungary #hungary #fishermansbastion #views #sheisnotlost #iamtb #travel #traveler #traveller #travelblog #travelblogger #traveladdict #traveltheworld #travelgram #instatravel #travelphotography #travelpics #travelphoto #travellife #travelmore #vacay #beautifuldestinations #travelawesome #views #travellife #nomad #aroundtheworld #ilovetravel #explore #exploring
Now we’re aware of how cliche this is but one of our favourite parts of Budapest was going to the baths! To be honest with you beforehand we weren’t quite sure if we were going to like it. The idea of a hundred people basically sharing a bath together was making us feel a little funny but they were recommend by so many people that we thought we had to give it a go! Once we got there we absolutely loved them and it didn’t feel dirty. There were no plasters lingering at the bottom like the Blue Lagoon in Iceland and it wasn’t too crowded! It was chilled, warm and relaxed and to be fair the crispy bright blue sky’s helped a lot too 💛 . . . Have you been in a thermal bath before? 💛 . . . 📍 Budapest, Hungary #sistersistertravels #budapest #budapesthungary #thermalbaths #szechenyibaths #hungary #travel #travelblogger #travelgram #instatravel #sheisnotlost #girlsthatwander #darlingescapes #thetravelwomen #ladieslovetravel #femaletravelbloggers #womenwhoexplore #wearetravelgirls #wearetravelladies #citizenfemme #travelgirls #wegotoo #weworktotravel
%d bloggers like this: