Now, we have to admit Pisa has never been on the bucket list as a destination, but ever since we were little, holding up the Leaning Tower of Pisa has been a full-on life goal and being so close when we were in Florence it felt rude not to go.

It’s the easiest journey from Florence, we caught the train from Santa Maria Novella (SMN) in Florence to Pisa Centrale in Pisa. It was a quick and completely pain free journey. However, when we actually arrived in Pisa it was a slightly different story. If you have read the rest of our Italian Series then you will know one our biggest pieces of advice is to just get lost… well in Pisa we did not want to do this but of course we did. This wasn’t helped by our lack of geological planning, our plan was to walk north and we’ll see it, it’s pretty big right. Wrong. The Leaning Tower of Pisa is actually a lot smaller (or shorter) than we imagined and it is not, we repeat not, as easy as just walking north.

After a lot of gesticulated chats with extremely helpful locals – who seemed pretty versed in this scenario – we found our pot of gold at the end of the rainbow. When we were walking around the corner we were giddy with excitement, life goal about to be achieved. Now, after the couple of circles we had walked in we weren’t there quite as early as we had hoped and there were already a number of tourist taking their turns holding up the tower so we decided to head straight up.

Top Tip: Get your tickets straight away because you need to wait for your time slot to head up the tower.

Even though it was a glorious sunny day it wasn’t high season so we only had a half an hour wait before heading up the tower. This was just enough time to check in our bags (they can’t be taken up the tower) and mentally prepare ourselves for this momentous occasion.

So, you’ll be aware that the whole tower leans right – making it pretty tricky to walk up. What more, it’s made out of marble and lime which is surprisingly slippy, especially if you’re wearing heeled boots, tut tut Camilla. We eventually made it to the top after having felt like we were walking around a crazy house at a fun fair like Sandy and Danny at the end of Grease and the view was beautiful.

When our mum went 35 years ago there were no railings at the top to protect you from falling off but we have to say, although it slightly affected the photography ability we were very thankful for those barriers! Your whole body is completely aware that it is leaning to one side so we decided to take a pew and take in the view. As we said the weather was glorious and you could see for miles – a shame we could see it earlier when we were trying to find it! You aren’t given a time slot for how long you can stay up there for so we took our time basking in the sun and appreciating the stunning view.

Then, if we thought that walking up was the battle we were wrong. Walking down is ten times harder. Your body is being thrown side to side and its super hard to adjust where your placing your weight as not to fall. Again, Camilla in her high-heeled boots struggled and we had a couple of flustered moment of ‘just walk past me I’m going to be a while!’ However, after safely landing back on the ground with a thud we can hand on heart say it wouldn’t have been the same with going to the top.

Next it was time to see the other beauties which Piazza dei Miracoli holds. We headed to the Pisa Cathedral and the Pisa Baptistery, beautiful buildings in their own right but we have to say the Leaning Tower of Pisa was by far our favourite!

Before leaving Piazza dei Miracoli we clearly couldn’t leave without the all famous shot of holding up the tower. We went with an idea of how we were going to get the money shot and we have to say it was a lot harder than we were expecting. You’re not allowed to walk on the grass around the building so you are restricted to the paths and with all the other tourists on top of the near impossible angle of the tower it’s no small task. The idea was to stand on one of the pillars surround the grass but low and behold they have balled tops. Going back to the unlucky fact that Camilla had heeled boots on, you can imagine our dilemma. We’re not going to lie we probably spent half an hour or so trying to work with these pillars before we retreated to the ground. However, it was one of the biggest giggles that we’ve ever had and everyone around is in the same boat so you all laugh together. We held it up, we pushed it over and we just posed. All in a day’s work in Pisa. 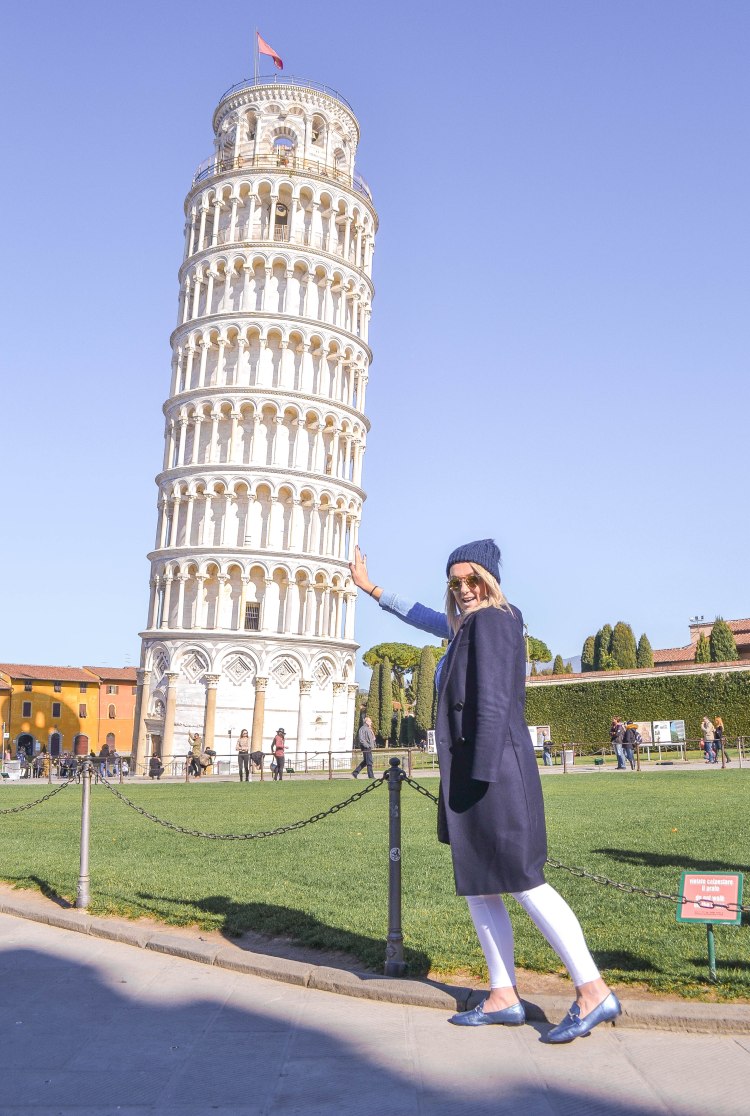 Top Tip: If planning a day trip to Pisa, wear trainers, or some sort of rubber soled, flat shoes, not boots, never boots.

Time for lunch! Now, again if you have read the rest of the Italy series or actually anything we have every written, food is a huge part of our travelling life and we can say we were not disappointed. To the south of Piazza dei Miracoli there are a cluster of restaurant to choose from, all offering the typical Italian menu and because they are also so close together they are offering insane deals for the business. Take your pick!

Walking back to the station we had time to appreciate this city a little bit more and we have to say the view of the river is stunning. The yellow and orange buildings bounce of the water creating a beautiful reflection. We would suggest crossing back over the river by the Santa Maria della Spina a small church built in a Pisan Gothic style and it is a treasure.

Our day trip to Pisa was everything we ever wanted it to be and we would highly recommend that is you are in Florence and you have time to drag yourself away – you won’t be disappointed! Holding up the tower is backbreaking work but someone’s got to do it.

One thought on “Whirlwind in Pisa – Day trip from Florence”