After leaving Delhi we made are way to Rajasthan, hopping on a train to Jaipur, Rajasthan’s capital. We stayed in the Moon Light Palace hotel, reasonably priced, not too far from the city centre and had a rooftop restaurant with a great view of Jaipur.

Jaipur, known as the pink city due to nearly every building within the city centre is painted a terracotta pink, is full of energy and life. Throughout the hustle and bustle there are wonderful markets to explore and historic places to visit.

Here are five things we recommend you do before leaving this beautiful city.

The Amber Fort is an extremely beautiful fort not too far from Jaipur. When you arrive to get up to the fort you can take an elephant ride, however due to the mistreatment of the animals we’d suggest walking up, it’s only 10 minutes and a great workout with amazing views on the way!

One of our highlights from the Amber Fort was the Sheesh Mahal, also known as the mirror palace. It is incredible! Completely covered in tiny mirrors and white marble creating amazing mosaics, previously described as a “glittering jewel box in flickering candle light”. Now who would want to miss that?! 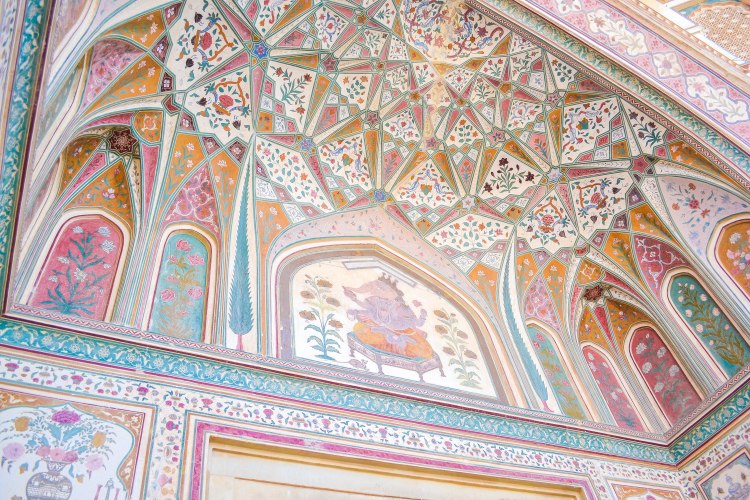 Jal Mahal, known as the Water Palace, is a serene setting in the middle of the chaos that is Jaipur. The light palace walls against the dark blue water give the illusion that it is floating upon the lake, it is a brilliant place the meet the locals and relax to get away from the busy city. Unfortunately, you can no longer visit the building or take boat rides on the lake, but it is a great place to admire the view and take some photographs!

Gaitore is a royal resting place for the Kachhwaha Rajput kings and the members of the royal family. We loved spending time wandering the different cenotaphs, each one in memory of the kings who ruled Jaipur. The cenotaphs are made of marble and sandstone with different and intricate carvings, it is a great place to explore and we promise you could spend all afternoon here!

As Gaitore, the Water Palace and the Amber Fort aren’t too far away from each other we decided made a day trip out of it, and it was a bloody good one at that!

However, do not be surprised when the locals ask for a picture with you. We found this was very common when we visited high profile spots all over India, calming down when we got to Goa. We admit sometimes it took us longer to get around places as we were stopping for a photo every five minutes! Yet, we normally agreed as we found it a great way to get good shots of the locals. Tit for tat is what we say!

The markets in Jaipur are among the best we visited in India. Located in the centre of the city, surrounded by the famous pink walls you could spend all day shopping and talking to the market owners, in fact we did!

From trying on saris to picking the most colourful shoes it is a great place to pick up those all-important souvenirs. YOU NEED to remember to haggle, barter and never take the first price. Although it can take a while to get used to, believe us we majorly over paid for some fantastic pair of shoes, after a while it becomes second nature.

Ever wondered what to do in evenings in India apart from stuffing yourself with all the delicious food?! One thing you cannot miss is seeing a Bollywood Film and Jaipur is the place to do it.

We went to the Raj Mandir Cinema to see a film called Happy Ending. Now the film was in Hindi so we can’t say we understood everything that was happening, but some sentences were in English and you could grasp the basic story line. Yet, going to see a Bollywood Film is more about the experience rather than the film itself. From throwing popcorn at the screen to humorous heckling it is not like any other cinema trip!

Stay tuned to find out more about our time travelling Rajasthan. Next stop: Pushkar!

4 thoughts on “The India Series: Five Must Do’s in Jaipur, Rajasthan”