We had four days in Lisbon so we have put together, what we like to think is the perfect itinerary, ticking off all the biggies in Lisbon itself but also stretching out a little to see Sintra, Belém and Cascais. This is the odd we did it in but it can be chopped and changed due to the weather.

Top Tip: if you do run into a little bit of cloudy weather, or godforsaken rain, head to Sintra. Talking from experience, it only enhances the sites!

What better way to begin your trip than to get on the historic no. 28 yellow tram? It gives you a good grounding when exploring the city afterwards and even more of a desire to wander. We jumped on the no. 28 heading East from Praça Luís de Camões. Now get there early, otherwise it gets super-duper busy with no chance of a seat and your going to need to save those legs for the hill climb.

It is like stepping back in time with the Tram shuddering and struggling to squeeze round corners but a magical way to see the city for the first time. The 28 Tram takes you around Alfama and all the way to Praça Rossio. It goes past some beautiful view points over the Tagus which we would recommend stopping off at.

Top Tip: Get a day travel pass! If you don’t you will need to pay each time you get back on the tram which rack up quickly. Trust us, you will be going past so many beautiful view you will be itchy to jump off regularly!

Now you are in Praça Rossio, you are at the foot of the Alfama district. If you aren’t a big fan of hill walking then you can get the 737 from Praça da Figueira which is one square across, but we would recommend stay on foot from here on out. The Alfama district is a mixture of quaint, curly-wurly streets which stretch all the way to São Jorge Castle which is the finishing line. However the beauty is, the journey is kind of better than the destination. São Jorge Castle is great with amazing view over the city, but the district itself was just the highlight of our day.

So yes, you will have seen a lot of stunning views throughout the day but we saved you the best till last and this one includes wine. Head over to Miradouro do Castelo before sunset — take a seat at the outside bar — order a beverage of your choice and watch the sun go down. We had a beautiful pink sky the first night we were there and it was magic.

Its time for Sintra! Sintra is basically Disneyland in the foothills of Portugal’s Sintra Mountains. It is littered with quirky and stunning Palaces, forts and elaborate residences.

With any place the earlier that you go, the less crowded it will be, so we got up early! You can get a direct train from Rossio Train Station in under an hour and then when you get there you can jump on the tourist loop bus right outside the station.

Top Tip: The loop bus takes you to the town first but we would recommend skipping the town until later in the day and getting on with the good stuff.

The next stop on the loop bus is C

astle of the Moors. This is a fort built high up in the hills, its it surrounded by lush, green vegetation and you’ll feel like you on a Game of Thrones set. There is a wall zig-zagging around the fort offering amazing view in every direction. You cannot miss this place!

Next, Pena Palace time! You can either get the loop bus or you can walk this section, there is not much distance between the two. Luckily a bus pulled up as we left the Castle of the Moors so we might have been slightly lazy and jumped on — but you can totally walk it.

Pena Palace looks like a real size Disney Princess palace. Its potentially the quirkiest building we have ever seen in our lives. Partly painted bright red, partly painted bright yellow, with a few blue and which mosaics thrown in for good measure. It is bazaar but brilliant and one of the main reason people come to Sintra. 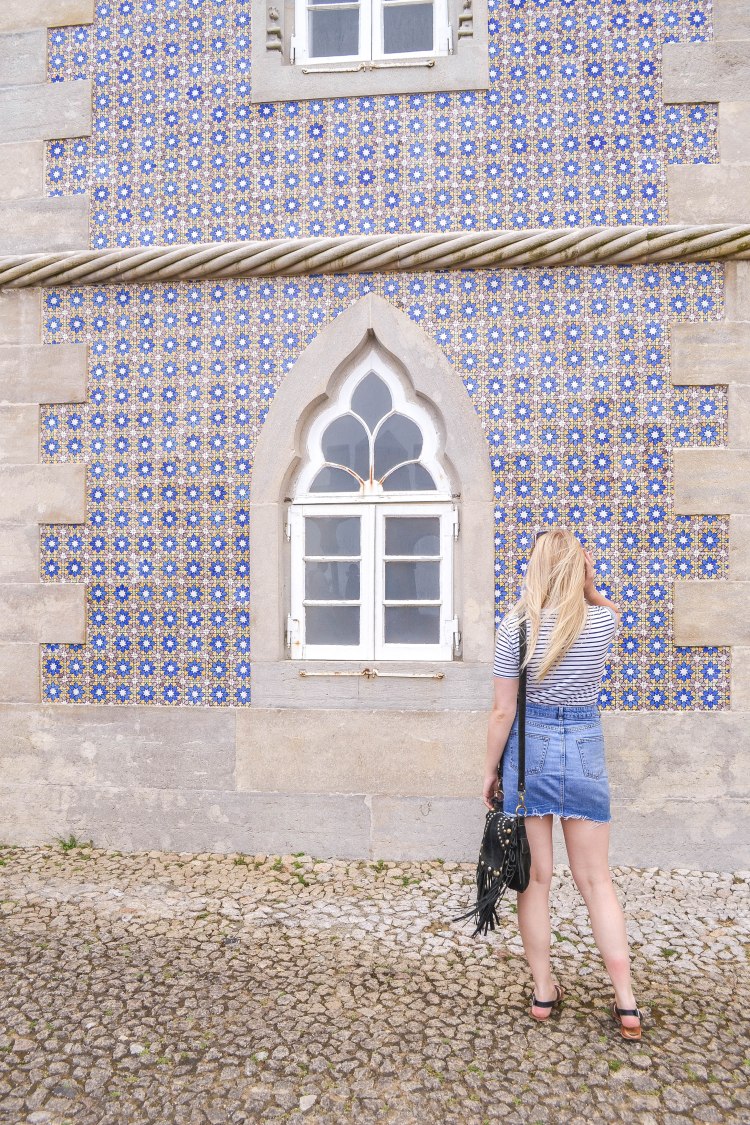 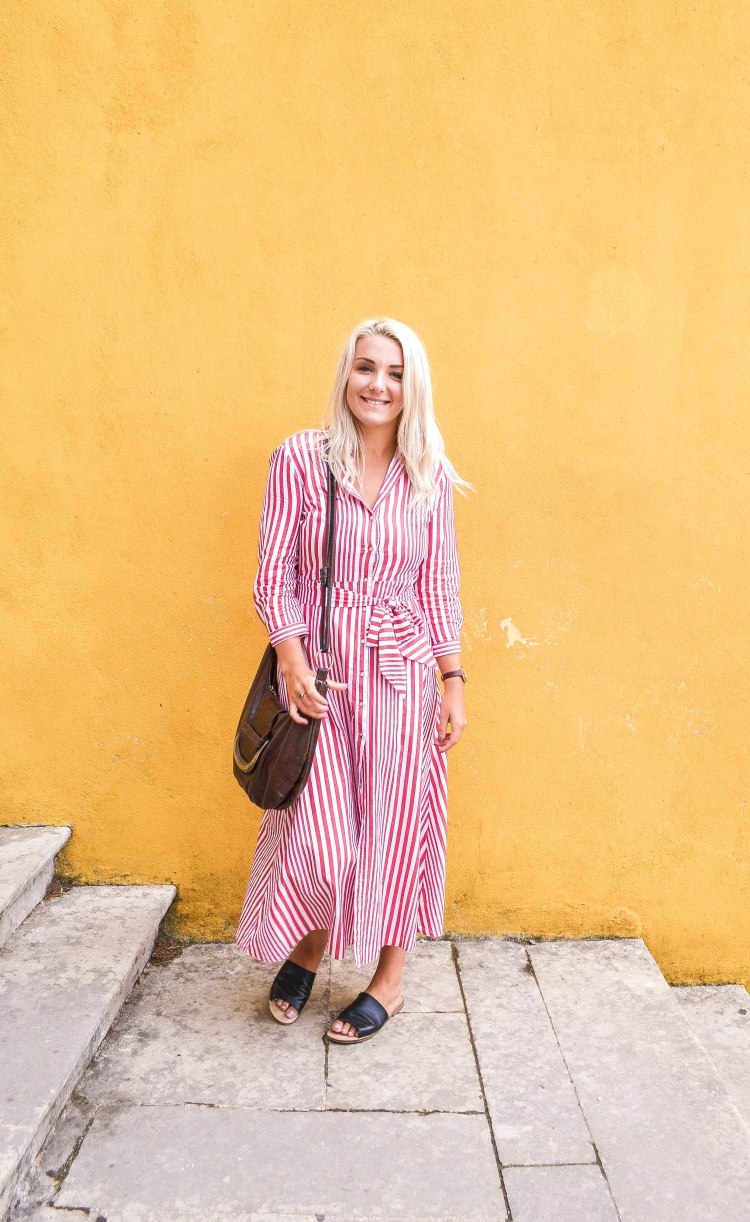 After Pena Palace hop on the loop bus back into town. The town itself houses the Sintra National Palace Palacio Nacional de Sintra, another palace but to be honest after Pena your a little ‘Meh’. It is a cobbled lane little town and the perfect place to grab lunch and get to the final stop of the day; Quinta da Regaleira.

Quinta da Regaleira isn’t on the loop bus as it is a privately owned residence however you cannot leave without paying a visit. It is a magical labyrinth of grottoes, underground passages, waterfalls, wells and a spiral staircases embedded in a thick, green canopy.

People told us get to Belém early it gets busy and we might have ignored that VERY GOOD advice and got stuck in some rather intense queues. So, we’re going to follow suit, get to Belém early. You can get a tram from Cais do Sodré which takes your all the way there! 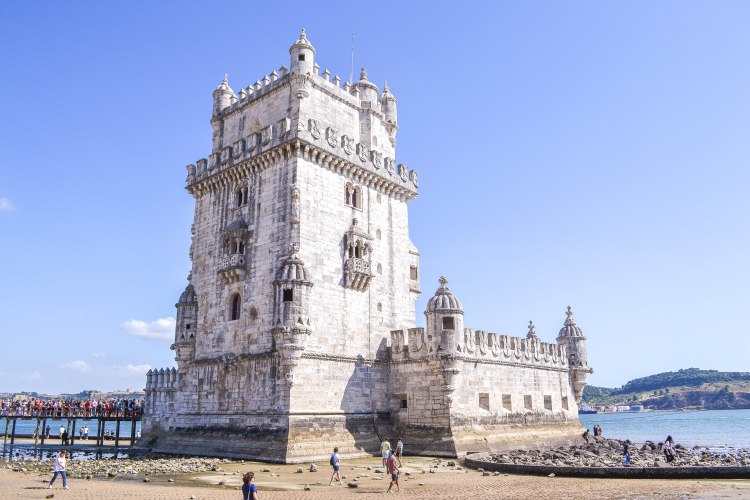 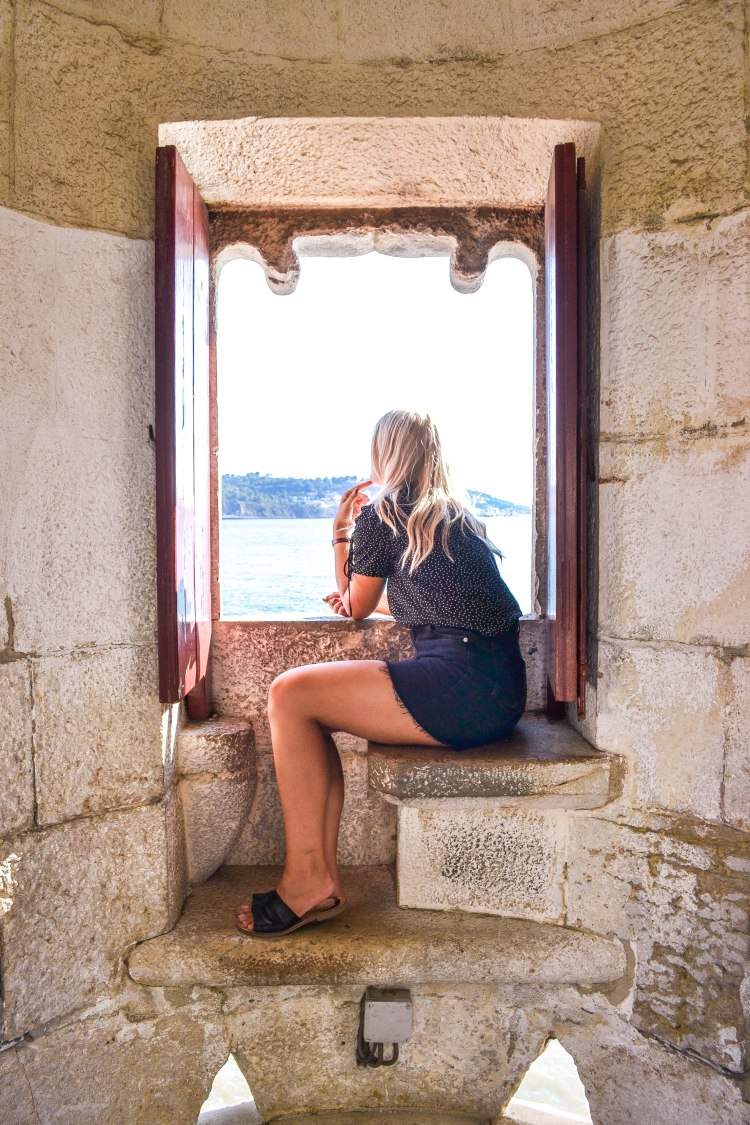 Now you will have done a lot of sight seeing and a lot of walking over the past couple of days, fancying lying on the beach for an afternoon? Yes? Great! Head to Cascais which is an old fishing village west of Belém. The restaurants still serve amazing fish, fresh from the sea and there is a range of different coves to take your fancy for some sun worshipping.

If a beach day isn’t really you think its is still a beautiful little down with lanes to get lost down, so 100% worth a visit. 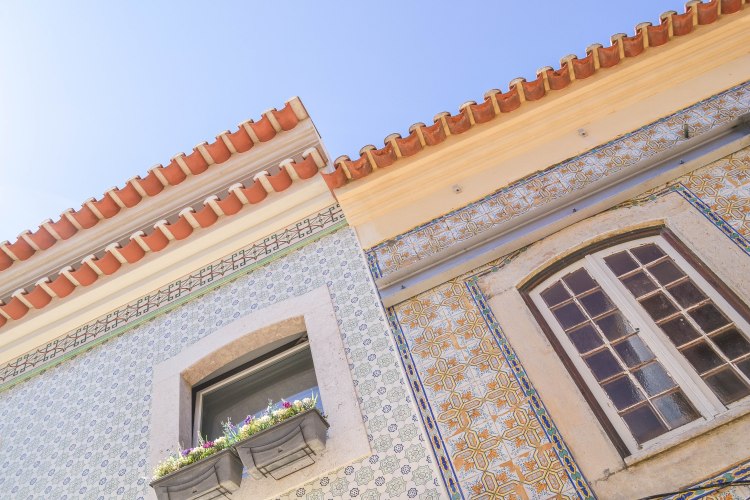 Now you’ve covered a lot of ground over the past three days but whats about the Praça do Comércio, the Convento da Ordem do Carmo and the Rua do Prata?! Well today is the day.

We would suggest starting in the Bairro Alto district. Now you might have spent a lot of time here in the evening for dinner like we did, but its just as charming in the day without the fairy lights. Its a true rustic Lisbon and a great area to have a wander and take a couple of snaps.

Afterwards, head over to what remains of the Convento da Ordem do Carmo, a beautiful old church with the roof removed which lets the natural sunlight flood in. The shadows that the sun creates, make the floor look like it has spider legs sprawled all over and it is stunning.

Time to indulge! Head back towards the sea from to the Time Out Marketand stop of for lunch, lunch 2.0 and lunch 3.0. It host an array of different restaurants serving food from all over the world and there’s a bit of wine there too. We have to say the croquettes are divine!

Now you have the food baby of a lifetime its time for a stroll along the sea front by downtown. Step into the sun from the Time Out Market and head East to Praça do Comércio which is a stunning and vast square painted the colour of Lisbon, yellow. Along the sea front are little stalls and a few bars, if you still have room.

Once your taken in the Praça do Comércio then you can wonder down the Rua do Prata on of Lisbon most popular shopping streets, take the credit card, you’re going to need it…